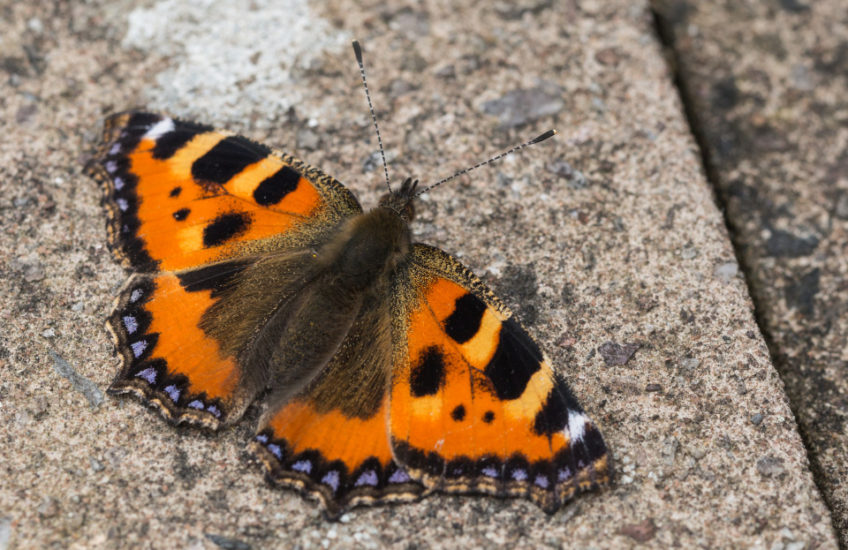 Butterfly wings are extraordinary when you look at them closely – and I got the chance to do that today because this Small Tortoiseshell landed on the patio and stayed there long enough for me to creep up on it. By the time I took this photo it was getting restive, and as soon as I moved it flew away; but a little while later while I was stalking hoverflies it reappeared next to me and landed on the weeping Cotoneaster bush, so I was able to get some more photos of it feeding. It’s obviously a fresh specimen, because the wings are almost perfect, and I liked the way its gorgeous colouring was set off here by drab background of the paving slabs.

Small Tortoiseshells are very common and widespread butterflies, but there has been some concern in recent years that their numbers have been falling. According to the web site UK Butterflies, one theory for this decline is “the increasing presence of a particular parasitic fly, Sturmia bella, due to global warming – this species being common on the continent. The fly lays its eggs on leaves of the foodplant, close to where larvae are feeding. The tiny eggs are then eaten whole by the larvae and the grubs that emerge feed on the insides of their host, avoiding the vital organs. A fly grub eventually kills its host and emerges from either the fully-grown larva or pupa before itself pupating. Although the fly attacks related species, such as the Peacock and Red Admiral, it is believed that the lifecycle of the Small Tortoiseshell is better-synchronised with that of the fly and it is therefore more prone to parasitism.”

Grim, don’t you think? Nature really is quite cruel. But luckily this little one survived the pitfalls of childhood, and if its luck holds it will be on the wing for several weeks before going into hibernation in early autumn. But it will need to accumulate body fat if it’s to survive hibernation, and during the last weeks of summer its increased body mass to muscle ratio will make it slow, and more susceptible to predation. Even if it makes it as far as hibernation it may still be eaten by a rodent if it doesn’t choose its nest site well, but if it survives all of these hazards and lives through the winter it will emerge in early spring next year, looking much tattier than it does now, ready to breed and produce the first brood of the new season.