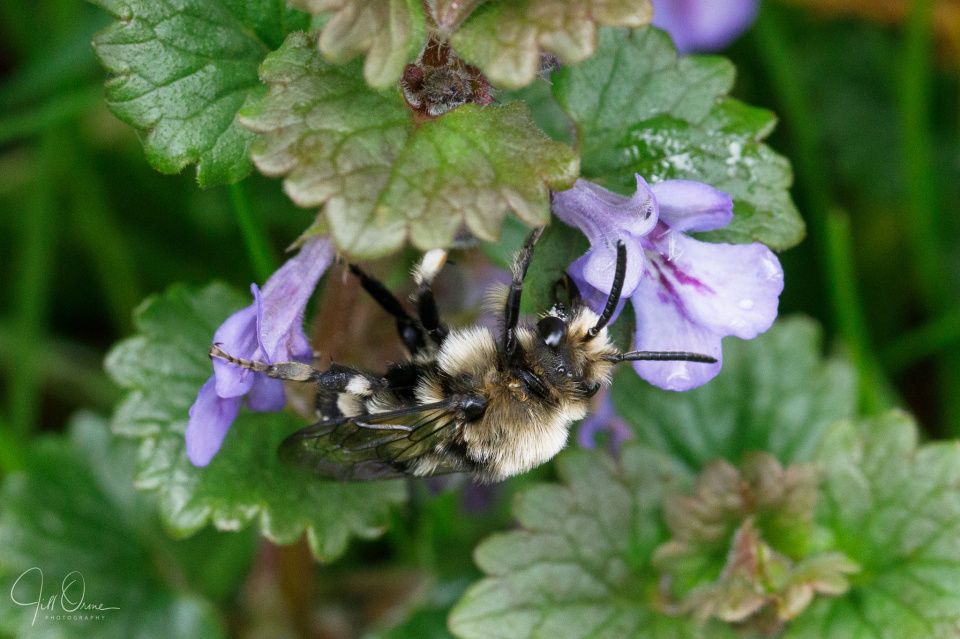 It was a better day than forecast, and certainly better than yesterday, though there was some rain early in the morning and late in the afternoon, as you can see from the moisture on the ground ivy in this photo. We were treated to some warm sunshine in the middle of the day though, which brought numerous invertebrates into the garden and gave me a happy couple of hours of pottering with the camera (and plenty of recording to do, as soon as I can get around to it).

I took these photos quite early, when it was still pretty overcast after a rain shower and I was battling with the exposure triangle, which meant that I didn’t really have the shutter speed for capturing a nervous and restless bee, but as soon as I realised there was a Melecta albifrons rummaging around in the ground ivy I was determined that he would be my subject of the day. There’s a little bit of motion blur in the main image, but I like the fact that it shows him feeding, and in the circumstances I’m reasonably happy with it. It’s the obtrusive grass stalk that spoils the extra for me, rather than the bee’s moving foreleg, but even though it’s a messy shot I’ve included it because it shows the dramatic markings of this very striking bee pretty well. 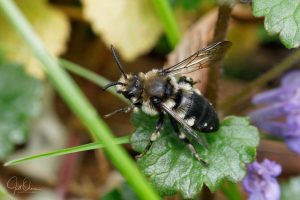 Melecta albifrons is fairly large, at around 13mm in length. The sexes look similar, but the male is slightly smaller and slimmer than the female, which has an especially bulky thorax that gives her a rather hunch-backed appearance. My rule of thumb, for what it’s worth, is that a handsome M. albifrons is almost certainly male, whereas an ugly one is definitely a female. These piebald markings are the most common livery of this bee, but they’re variable, and there’s an entirely black form, which I had among the piebalds in the garden last summer.

Melecta albifrons is a cleptoparasite of my beloved hairy-footed flower bee, but occurs in much smaller numbers, and doesn’t appear to threaten the viability of its host. The female will search out an unguarded Anthophora plumipes nest and lay an egg in an already stocked nest cell; the Melecta egg hatches before the host egg, and the larva consumes the host, along with the food stock left by the female Anthophora. This is all quite poor behaviour, and I can’t bring myself to approve of it. In fact, whenever I see a female Melecta albifrons I always feel a crazy urge to try to warn the nearby plumpie females, who are industriously building and provisioning their nests with no suspicion that they’re being searched out by a cuckoo. On the other hand, I do think that this is a fabulous little beast, and that the garden would be poorer without it.