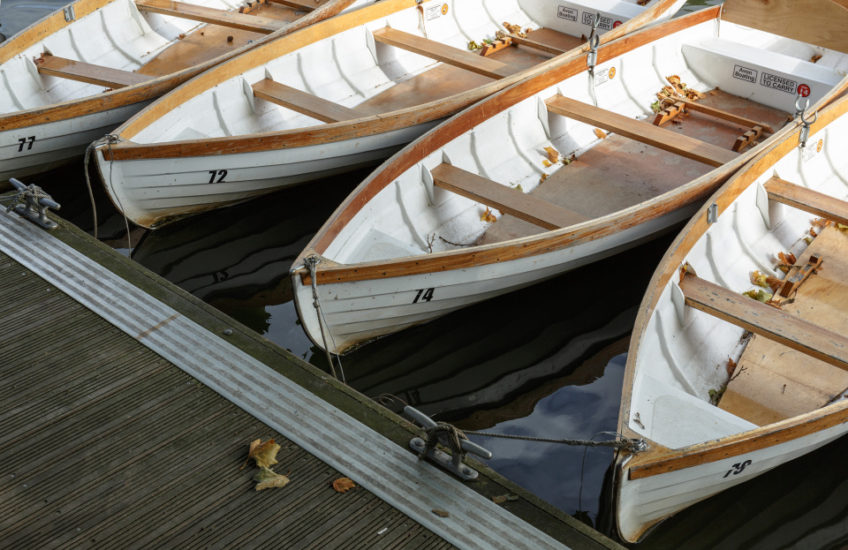 The people who run the cruisers which take tourists up and down the Avon from Stratford, and hire out small boats to those skilled, brave or foolhardy enough to want to propel themselves, are coming towards their quiet time of year. Stratford is never without tourists, so there is always some trade for the cruisers, but the colder it gets on the river, the fewer the customers for these rowing boats.

Today was bright but chilly, and the cruisers were actually doing a roaring trade – there were queues for the short river trips, which I don’t remember seeing even at the height of summer; but the rowing boats were attracting hardly anyone. I wandered over to take a look at them because I recently saw a very nice photo taken by a fellow member of BGCC, in which the ripply reflections between the boats and the dock reminded me (in a good way) of those awful Painting by Numbers kits we used to have as children. But the sun was less strong and lower this afternoon than when M took his shot, so these are subtler reflections. I like the fact that the overhanging trees are speaking of the season by dropping their leaves quite picturesquely into the boats.

As R and I walked on we had an enjoyable discussion about Painting by Numbers, and excitement one felt as a child about being given oil paints, which was rapidly followed by disappointment and frustration because they were so very difficult to use. Which is a bit of a metaphor for my attitude to adulthood, if I’m honest. I seem to remember receiving several Painting by Numbers sets over the course of several years, but so far as I can remember I never finished any of the paintings – and that’s a bit of a metaphor too…!