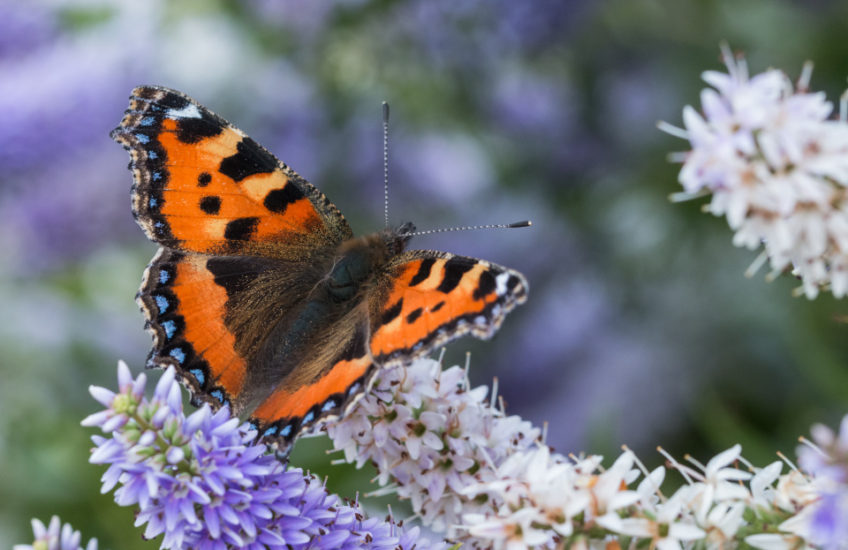 So there I was, trying to live up to the reputation laid on me the other day by Ms Bifulco of being one of the Bug Pornographers in Chief around here, when my shoot was photobombed by this Small Tortoiseshell butterfly. It didn’t stay long – maybe the direction I was giving to the seven Common Red Soldier Beetles (three couples and one lone male in a state of, ahem, readiness) offended it – but of the ten shots I kept from today this non-pornographic one pleased R and me the most. I’ll wrap the other photos in brown paper and leave them behind the third bin from the left on the concourse at Waterloo Station: payment (in used fivers, please) can be left as usual with the one-legged harmonica player outside the Houses of Parliament.

In other news, I wish to record that I washed the car today; probably the first time I’ve done such a thing since about 2007. The Golf was cleaned once a year, by the garage, when it went in for its annual service, and the RAV I had before that wasn’t much better cared for. And what, I can hear you wondering, was the trigger for this unwonted piece of domesticity? I’ll tell you then, shall I? I got an email on Thursday. Diamondbrite, who do the protective coatings on new cars, emailed me and said, in effect, “That car is filthy, and you need to wash it.”

I’m not making this up. They emailed me and said “It’s time you washed the car.”

On the other hand… fair do, it was filthy.

So I washed it, using the special dead bug dissolver and the special foamy washy stuff from the substantial cleaning kit which occupies much of its tiny boot. I also used the special wheel cleaner stuff, though not the special glass cleaner – you do have to draw the line somewhere. And I rinsed it – properly, with clean warm water and a cloth. And I vacced it out.

And then, because I’d gone into a kind of trance by that time, I cleaned the kitchen and family room windows. A mistake, this, because now I can see the garden, which needs either serious weeding, or concreting over. On the plus side, I’d forgotten that the lawn was that colour.

This evening I have drunk some wine. Can you tell?

Tomorrow, my Special Powers are telling me, may bring a headache, a somewhat fractious temper and a healing fried breakfast.