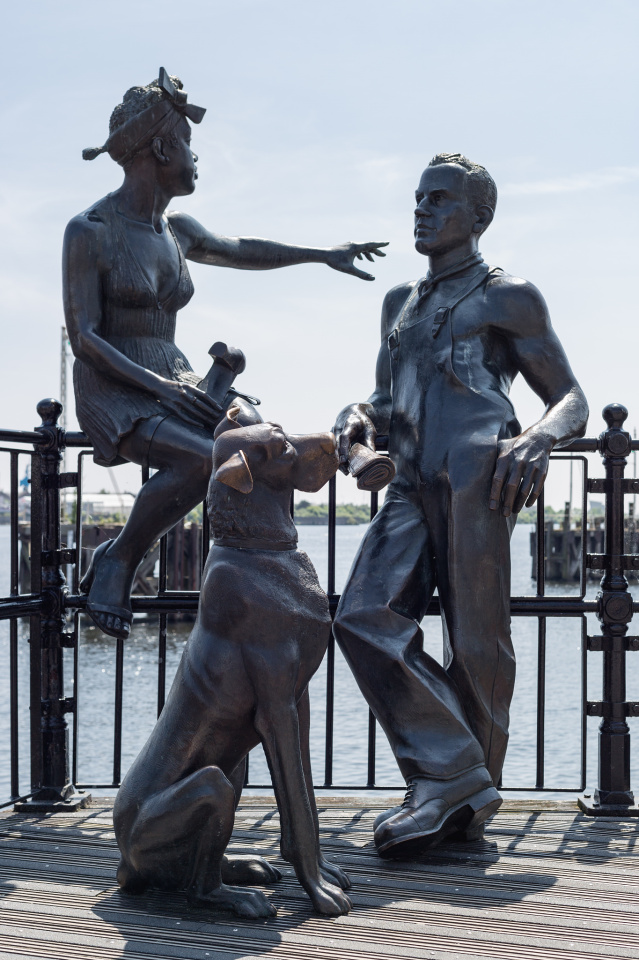 R and I went down to Cardiff today to take The Animator and her young man The Statistician out for lunch. It was a perfect early summer day (how much nicer a drive we would have had through the Black Mountains in a little open-top roadster!), and Mermaid Quay was thronged with people enjoying the middle day of a fine Bank Holiday weekend.

I’ve photographed this statue before, but not featured it as my main image. It was sculpted by John Clinch in 1993, and represents the history of the Bay area (which fans of the singer Shirley Bassey are probably aware used to be called Tiger Bay). A number of web sites all use the following quotation, but with no credit to its original author or publisher; I will do the same, but with an apology for lack of attribution:

‘Conceived and produced by Welsh artist John Clinch, this bronze sculpture celebrates the people of Cardiff Bay. Clinch comments, “the woman reflects the diverse cultural and ethnic mix of the docks and, in his boots and overalls, the man is a reminder of the once world-famous, busy port. The dog is for children to enjoy”.’

I can only begin to imagine the changes the Bay has seen in the past 60 or 70 years: there’s almost no trace left now of the working port and the streets which would have stretched away behind it. In fact I suspect that considerable change has taken place even within the time that the statue has been in place on the quay. But there’s something optimistic about the outstretched arm of the female figure, pointing away towards the horizon, which seems to me to represent the resilience of the area, and its transformation from a place of hard manual labour and deprivation into one largely given over to leisure pursuits and commerce, and also now the home of the Welsh Senedd. And it’s clear (not least from the well-rubbed surface of the dog’s head) that this statue is much loved by local people as well as by visitors.