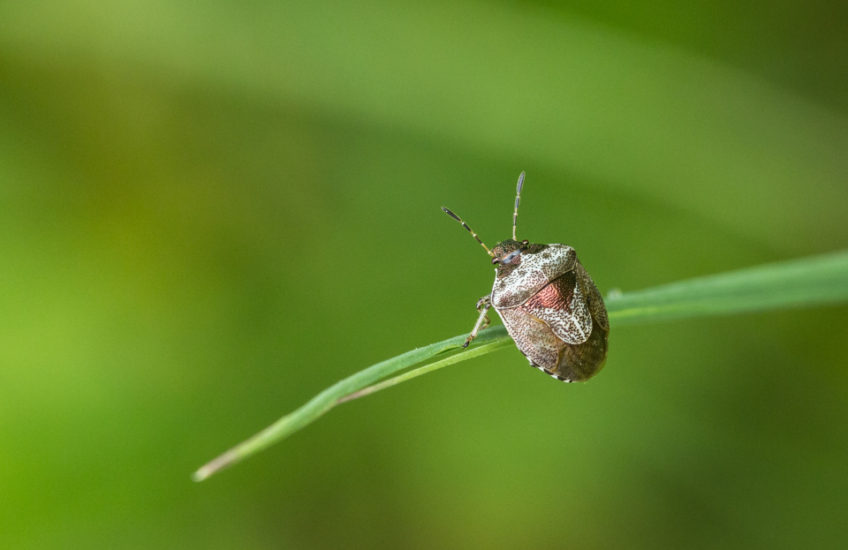 Thank you so very much for your lovely comments, hearts and stars on my 730th blip yesterday – I will try to respond individually to the comments over the next couple of days, but for now I’d just like to say how very heart-warming I found the reaction. It is a genuine pleasure to be a part of this community!

Today the normal service of bugs resumes: when I saw this tiny chap I assumed that it was one of the smaller ladybirds – it’s only about the size of a 14-spot – but when I focused on it I realised that it was a species of shieldbug I’d never seen before. A little research revealed it to be Eysacoris venustissimus – a ridiculously large name for such a tiny bug, but rather charming I think. It’s commonly called the Woundwort shieldbug.

I can’t honestly say that I’ve noticed any Stachys sylvatica, or hedge woundwort, in the overgrown bank across from the house – though there may be some that’s not immediately visible. But I believe E. venustissimus will eat dead-nettle if its preferred plant isn’t available, and there’s certainly plenty of that. I’ll keep an eye out for more of these little creatures to see if they’ve colonised the bank; if I’m lucky I may even see nymphs later in the season, though they must be extremely tiny.