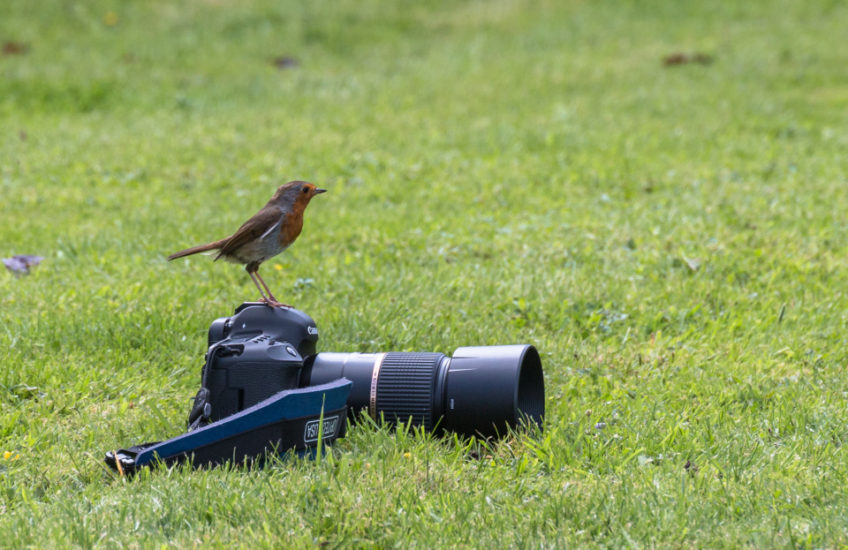 Unlike a photo of an owl perched on a camera which I saw in a wildlife photography group on Facebook this morning, and which was promptly and ruthlessly demolished by the Posed Wildlife Photo Police, this shot is a happy accident.

R and I were hacking our way through the virgin jungle that is one of our unweeded “flower beds” this afternoon, when we were joined by a robin, which repeatedly darted to where the soil had been turned over and helped itself to insects and grubs. It was so thin that I assumed it was a juvenile, until I spotted that it was collecting a beakful at a time and then disappearing into the nearest hedge, to return a minute or two later for some more – at which point I realised that it must be a parent feeding chicks. I’ve really no idea how to tell a male robin from a female, but from time to time a slightly larger individual would also come down and collect food, without any sign of aggravation between the two, so I assume that the very thin bird was Mrs Robin and the slightly bigger one was the Man of the House.

I had both cameras outside with me – the 5D with macro for bug hunting, and the 70D with my 70-300 zoom in the hope of getting bird shots. For the first hour that I was out though, Mrs Robin was rarely far enough away for me to be able to use the long lens: the extra shot was taken with the macro, when she was no more than a couple of feet away from me. After a while I got bored with weeding, put down the macro and began stalking butterflies with the long lens – and then realising that R had brought some mugs of tea out to the patio table I went to join him, taking the 70D with me.

As we sat admiring our handiwork and wondering how much it costs to employ a full-time gardener, Mrs Robin suddenly swooped across the lawn and landed on the 5D. She was still just long enough for me to focus and take two frames, and then she was gone – leaving me seriously doubtful as to whether I’d caught the moment.

We were probably 20 metres from her, so even with the zoom at full stretch on a crop-sensor camera, this has needed quite severe cropping. But other than that, and some contrast and sharpening, no fartnarkling was needed. My apologies to Nickimags888 for not coming out to play on the last Mono Monday of her current hosting stint – but as this may never happen to me again, I really did have to blip Mrs Robin.