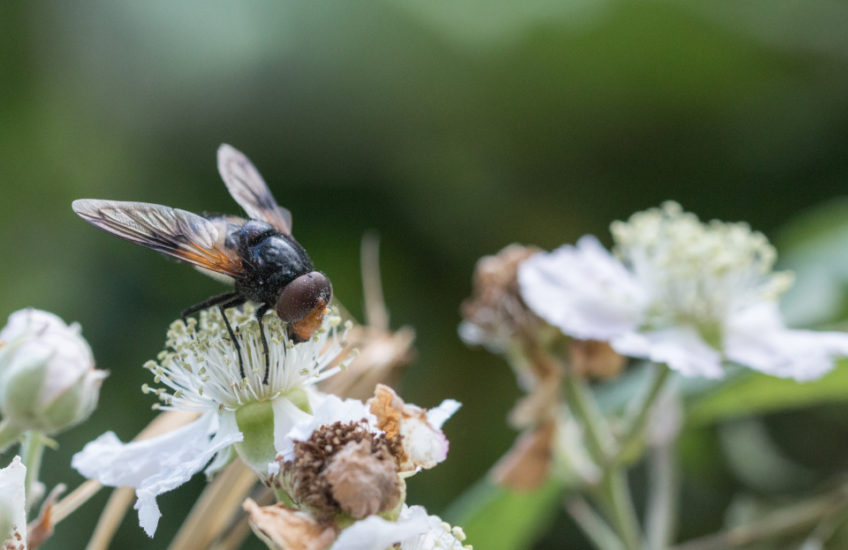 This is one of our largest and most easily recognised hoverflies: Volucella pellucens, commonly called the Great Pied Hoverfly. It’s about the size of a bluebottle, and could be mistaken for one but for the fact that the white banding on its abdomen is so distinctive – I’ve put in a second photo which shows that more clearly. It’s mainly a woodland fly, and is quite common in our village because there are plenty of trees in the large gardens here. Males such as this one tend to be territorial; they will find a place which appeals to them and hover there at about human head-height, watching out for females. After leaving this chosen spot to feed or defend their range, they will usually return to hover again in exactly the same place. This is a very fresh specimen and will live between two weeks and a month, in which time his primary urge must be reproduction. 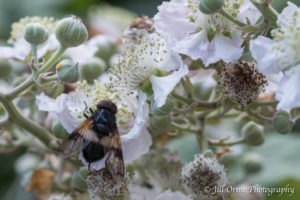 V. pellucens is generally regarded as a wasp mimic, though you have to say that it’s a poor one – perhaps its size gives it a certain amount of protection from potential predators. But the mimicry is apparently good enough to fool wasps: females lay their eggs in the nests of social wasps, and seem to be able to enter and leave unmolested by the owners. (By contrast V. bombylans, the bumblebee mimic, is often stung by angry bees when entering a bee nest for the same purpose, her reaction to which is to drop her eggs immediately.) The V. pellucens larvae will scavenge for and eat debris and dead wasps, and then leave the wasp nest and burrow into nearby soil to pupate, emerging as adults the following summer.

And now: Living in Interesting Times.

The row sparked in the Tory Party yesterday by The Times reporting accurately something Andrea Leadsom said about Theresa May being childless shows no sign of dying down – if anything, it’s getting worse, with a number of senior members of the Parliamentary Party calling on Leadsom to apologise, or even withdraw from the contest: she has shown, they say, that she is not Prime Ministerial material. Given the fact that the Conservative Party will generally tolerate anything electable provided it wears the right colours (remember that not a solitary hair was turned publicly over David Cameron and “Pig Gate”), this collective heaving noise from the upper ranks can really only mean that they think Leadsom might win the leadership, and then lose them the next election.

Personally I doubt that Leadsom much cares what Ministers and senior Party officials think – she will assume that if she gets the keys to Number 10 they’ll all swing in behind her, albeit with gritted teeth. And her statement may even have been deliberately provocative – I read one comment yesterday which described it as coming straight from the Donald Trump playbook, and this is a credible reading: having demonstrated herself to be “straight-talking”, she is now painting herself as the martyr in the tale, first stitched up by the evil press, and now hounded by May-lovers within her own Party. Her campaign manager, a man called Tim Loughton, has a track record in this kind of nastiness, and in an interview with The Guardian yesterday was milking the situation for all it was worth.

Possibly more damaging to Leadsom is the news that her campaign for the leadership is being enthusiastically endorsed by the far-right group Britain First, which apparently described her as a “patriotic, Christian, opponent of political correctness”, and Theresa May as a “corrupt, ghastly, self-serving parasite, treacherous EU collaborator and friend of Islam”. I confess that it’s more than my own stomach can stand to visit Britain First’s Facebook page: I lifted those quotes from this article in The Daily Mail. It’s also interesting that Leadsom has failed, so far, at least, to secure the backing of a major newspaper, with the Sun and Daily Mail both endorsing May – but the unanswerable question at this stage is how the two candidates appear to people with the power to actually vote on them: registered members of the Conservative Party who joined prior to 9th June this year. Both camps in this contest are currently trying to scare those registered voters into coming down on the side of their own candidate, via predictions of doom for the Party if the opponent is chosen: Leadsom’s supporters are saying that if May wins there will be an enormous surge of support for UKIP, and the May camp are suggesting that if Leadsom wins an entirely new, centre-ground party may spring into being.

If you’re as old as I am, it’s the latter suggestion which rings some interesting bells, because it’s been tried before: in 1981 four senior but moderate Labour politicians, alarmed at what was happening within their own Party, broke away and formed the Social Democratic Party. I even voted for the SDP at the 1983 General Election – and watching the count that night with one colleague who had voted Labour and two who had voted Liberal, was mortified to see Margaret Thatcher’s Tories storm through the middle of the split opposition vote to the most decisive win of any party since Labour in 1945. Eventually the SDP fused with the Liberals to form the LibDems, who puttered on more or less creditably until last year’s GE, when they were viciously punished by the electorate for having gone into coalition with the Tories in 2010: they now have just eight MPs and are widely regarded as irrelevant, though they have been picking up new members since the referendum.

The concept of disenchanted Conservatives breaking away to form a new party would have been laughable until recently – that kind of indiscipline has never been a Tory Party tradition – and I still think that at this stage it’s just a chimera. And yet…

It’s hard for anyone to see how the internecine war within the Labour Party can end until everyone simply dies of exhaustion, or the Party splits in two. Corbyn still seems to have huge support at the grass roots level of the Party, but virtually no-one in the Parliamentary Party will have anything to do with him. Angela Eagle will formally challenge for the leadership tomorrow, but unless she ups her game from the lacklustre performance she put in on Peston this morning, or unless she’s just the stalking horse to allow a really deadly challenger to come through, Corbyn will win. So we will still have Corbyn, the unions and the bulk of grass roots supporters on one barricade, with most of the PLP and the rest of the grass roots people on the other, continuing to hurl threats and abuse at each other and utterly failing to provide effective Opposition.

But what if – just what if – some centrists from both parties did a breakaway? Would there be a public appetite for that? In the wake of the referendum debacle, with large numbers of people saying “Who am I going to vote for now??? I can’t bring myself to vote Labour-under-Corbyn/ Conservatives-cos-they-started-all-this-chaos / LibDem-cos-they’re-useless…” I think there just might be. For years this country has said that what it wants is Strong, Decisive Government, which is why minor parties have always struggled to gain traction – and given the chance in 2011 to adopt proportional representation, the nation booted the idea into the long grass in favour of keeping the first-past-the-post system. But with the Tories moving right and Labour left, and faced with the choice of Strong, Decisive Government led by either Corbyn or Leadsom, I think the centre ground of the country (which I hope continues to be the bulk of us) might just reassess its attitude and decide that actually, coalition government isn’t the worst thing that could happen, and that therefore there’s room for a credible centrist party containing non-sociopathic ex-LabCons.

Perhaps we could have a public vote on what to call our new party!

Then again, perhaps not.