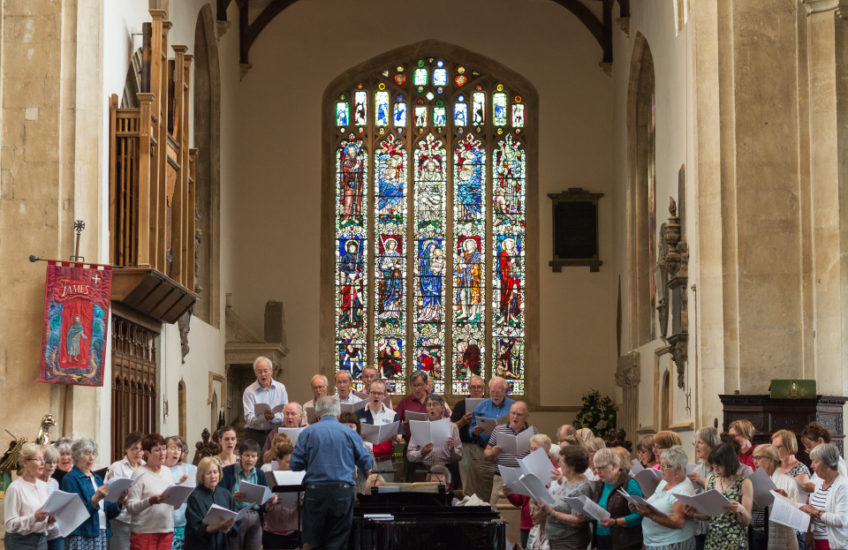 This afternoon Chipping Campden Festival Chorus had our final rehearsal for this evening’s concert, and as I seem to have picked up the task of setting up a Facebook page for the choir I took the opportunity to wander about and take some photos to illustrate it.

It has been a slightly difficult season: the problem with operating a choir in the summer is that many people go away on holiday, and others like to spend as much time as possible in their gardens or out enjoying other warm weather activities – therefore our Director has struggled to get good turnouts for rehearsals, and many of us had been fearful that we wouldn’t be up to performance standard by today. Even three days ago the whole enterprise looked shaky. But between Wednesday and Friday some kind of alchemy happened, and everything began to gel. This afternoon’s rehearsal was enjoyable – and the concert itself was a complete blast. I’m really sorry that it’s over.

This shot shows the choir working on the Brahms Liebeslieder Waltzes, performed to the accompaniment of a piano duet. Our two pianists, barely visible here, are Charlie Bennett, founder of the Chipping Campden International Music Festival (to which the Chorus is affiliated), and the gorgeous Jessica May, who somehow finds time in the midst of all the other stuff she does to be our rehearsal pianist, and does what can be a thankless job with grace and great good humour.

The Liebeslieder Waltzes formed the first section of our concert this evening; the second section was a rousing performance by Jess and Charlie of Schubert’s Fantasie in F minor; and then the choir performed some Music for Royal Occasions, to an organ accompaniment by Hugh Banton. The Royal Music was topped and tailed by Parry’s I Was Glad and Handel’s Zadok the Priest, both of which I absolutely adored singing. The choir came together so well in those pieces that it felt like flying – and given the chance I’d have happily rocked them both out again as an encore.

And so we go into our summer break, reconvening in September to start work on Mozart’s Requiem for our concert at the end of November. As Mozart died on 5th December, and is known to have been working on this piece of music in the weeks before his death, it seems very appropriate that we’ll be performing it 225 years later. It’s one of my very favourite pieces of music and I can’t wait to start working on it.

I don’t want to spoil what has been an enjoyable and warmly emotional evening by getting myself all riled up – again – but I do recommend to you Marina Hyde on the utter bizarreness which is Andrea Leadsom’s surge towards Number 10.