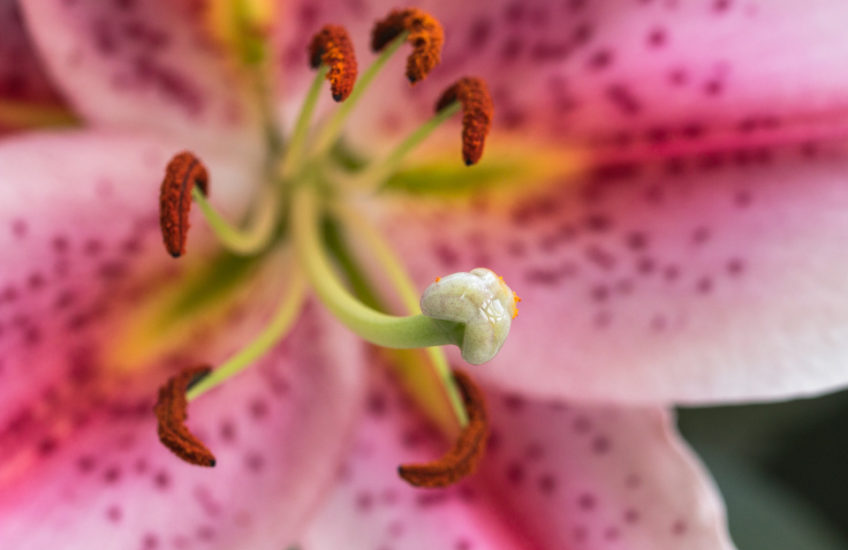 I may well have mentioned this before, in which case please feel free to tune out now, but though I love selective focus shots when other people such as rainie and flying do them, when I try I generally hate them.

Perhaps I need to bump a Lensbaby up the lens list…. Sorry – where was I…?

Oh yes – selective focus. This week’s homework assignment in A Year With My Camera was to shoot a macro shot on wide aperture, so, ever game, I gave it a go yesterday – and duly hated the result. My macro lens goes to f/2.8, which gave me an image which looked to me like soup. I tried again at f/4 and found the photos a little more acceptable, and at f/5.6 I almost liked them – in fact I think that yesterday’s blip was an f/5.6 shot.

As is today’s. I photographed these lilies at f/2.8 (hateful), f/4 (OK provided I squinted through almost-closed eyes), and finally got up to f/5.6 and thought “Yes – I can live with that”. I womanfully resisted the temptation to do some focus stacking, though I had a bit of a stress reaction and had to eat a bar of chocolate.

Have you ever inflated your CV a little, to make you appear more attractive to a potential employer? Personally I haven’t, because I’ve fallen into most of the jobs I’ve ever done pretty much by accident; and my current employer knows every skeleton hanging in my closet, on account of having been married to them all for over a quarter of a century. But I know it’s a fairly common thing to do – if you have the necessary skills and you don’t actually lie, and provided the claims you’ve made will stand up to the potential employer making a few phone calls, where’s the harm?

Tory leadership contender (and grass roots favourite) Andrea Leadsom, currently pitching for the Very Top Job in British politics, has been caught out over a massaged CV. Now where’s the harm?

And worse (it seems to me) than slightly reimagining her old job titles, is the fact that she has repeatedly claimed to have been part of the team which helped and advised Eddie George, former Governor of the Bank of England, over the weekend following the collapse of Barings Bank, when he was trying to reassure the City and prevent the markets going into free-fall. And yet, other people who were present during this weekend have reacted to the claim with bemusement, and a journalist called John Gapper who wrote a book about the collapse of Barings says that her name never came up during his researches.

So I would say to Ms Leadsom: find some evidence to back up your claim pdq, or slink off back to your corner at your own chosen speed. Because right now it looks as though you’re either a liar or a fantasist, and either would make you unfit for high office.

Though I doubt she’s listening – why would she need to when the Brexit camp think she’s Their Girl? The rest of us must just hope that she falls at the final hurdle, because if she gets into Number 10 we won’t be able to winkle her back out until 2020, and goodness knows how much damage she’ll have inflicted on us all by then.

Sources:
The Guardian (predictably)
i News
Zelo Street (blog)
The Daily Telegraph (more worryingly for Ms Leadsom – for those of you outside the UK, it’s commonly known as The Torygraph)
The Spectator (also right-wing: it was formerly edited by Boris Johnson)
The Times originally broke the story of the massaged CV, but I can’t bring you that piece because it’s behind a paywall.
The Guardian (again).