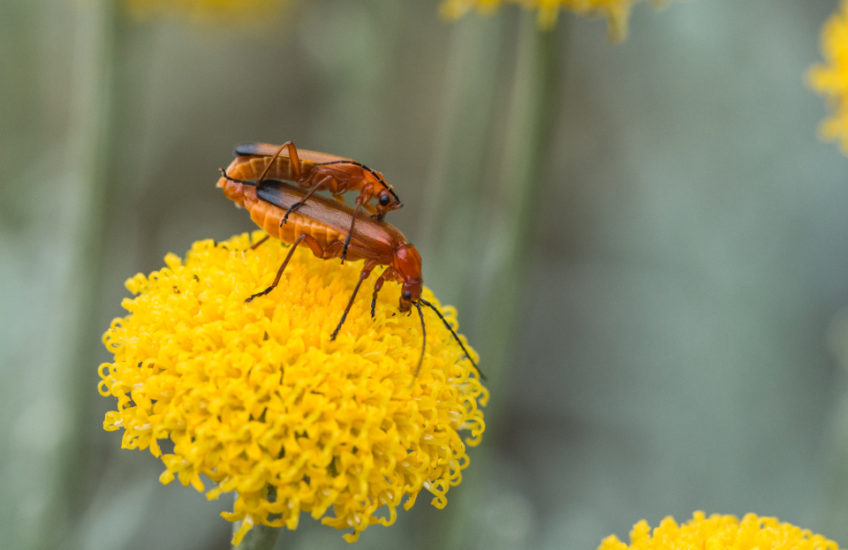 Good grief – what do they think I’m running here? Some kind of flop house?

Common by name as well as by nature, these are Common Red Soldier Beetles (Rhagonycha fulva), getting it on on the Santolina chamaecyparissus which has completely taken over one of my two Alpine troughs. I need to find this plant a decent-sized bit of garden, before it decides that owning the entire planter isn’t enough and moves into the house with us. But I don’t want to disturb it while it’s flowering, because it’s a magnet for small bugs – today it was playing host to numerous tiny Colletes bees and a swarm of Thick-legged Hoverflies, as well as several other Soldier Beetles and numerous flies.

By the way, if Mrs looks to you to be decidedly unengaged, you’re quite right: she took not the slightest interest in the proceedings, carrying on eating throughout – in fact, when she exhausted this flower head she simply marched over the edge and down the stalk to a neighbouring one, with Mr still in situ. He, on the other hand, was enjoying himself mightily, and it’s a shame that this is a still photo and therefore you can’t see the rhythmic waving back and forth of his legs and antennae. He’s flexible, I’ll grant him that.

I was somewhat dismayed earlier on to see that that Hillyblips seems to have been poking round my garden this afternoon – she certainly gets around for someone with her foot in a cast. Surely though, she can’t have her own Santolina and Soldier Beetles? I thought I was the only one! I tried to scare her off by yelling “BLIPSNAP!!”, but I have to admit, through gritted teeth, that she won by posting her shot first.

Gove-watchers among you will possibly be disappointed to learn that The Gove is now, at least as far as the Conservative Party is concerned, a Dead Parrot. Disgraced Former Minister Liam Fox was eliminated from the Tory leadership contest in the first round of voting a couple of days ago, with Humble Stephen Crabb also bowing out at that point; and today in the second round Gove came a pitiful third, with only just over half the votes of second-placed Leadsom. Theresa May topped the poll by a very wide margin, but it remains to be seen if she can win the leadership when the final decision is made by grass roots party members: Leadsom seems to have a great deal of support out in the Shires.

For an insight into Leadsom’s views on various things, see this actually pretty nuanced ITV News interview. However, I’ve been pondering the fact that she was originally pro-EU and then swapped to the Leave camp; and the fact that she voted both for and against the Bill to legalise gay marriage…. and wondering just how much I want her wavering finger to be the one poised over the nuclear button. I’m generally in favour of people being allowed to change their minds about things – but probably not five minutes after they nuke Moscow.

May, however, is utterly despised by many on the right of her own party, who would have you believe (I kid you not – I read this stuff today so you wouldn’t have to) that she’s in favour of the UK accepting Sharia Law, and of paedophiles being able to adopt children. Leadsom, they say (repeatedly, ad nauseam, in capital letters, with multiple emojis of applauding hands) is the One For Them. Which, let’s be honest, would be enough to make her Not The One For Me, even if she weren’t in favour of allowing foxes to be ripped to pieces by packs of baying (braying?) constituents.

For a laugh, see Marina Hyde on the political demise of Gove.