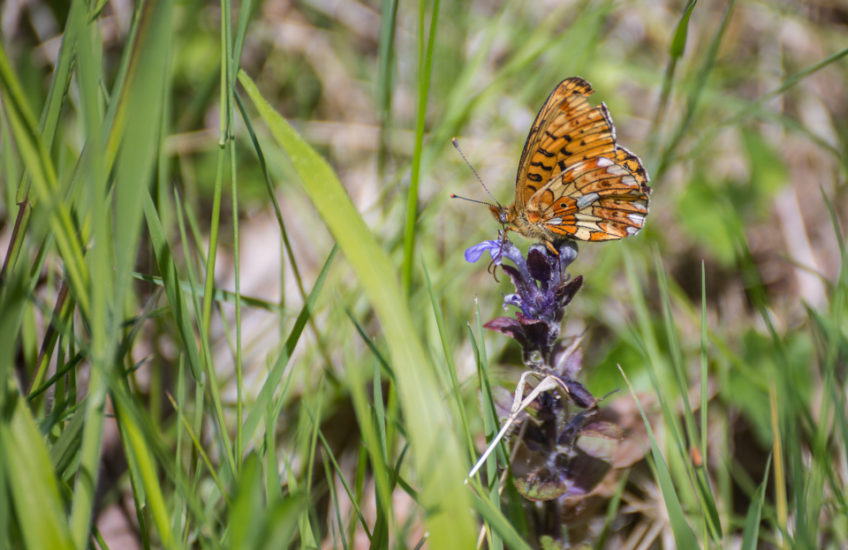 As it was a lovely spring day I decided to leap out of my groove once again and take trip over to the Wyre Forest, an ancient broad-leaf woodland on the opposite side of the county which is now a large nature reserve. It’s an hour’s drive from us, which filled me with guilt over fuel consumed and emissions created, but my gloom lifted as soon as I’d managed to squeeze the car into the packed car park and set off on a new trail which has been marked out by the people at Butterfly Conservation.

The trail is about 6km long, provided you don’t get lost, and should be walkable in a couple of hours. The first section is pretty easy – it runs along what used to be a railway track, and is flat and dry. At one stage it runs through what was obviously a cutting, and the bank in sunlight was busy with Pearl-bordered Fritillaries – a formerly widespread species, which has declined sharply in the past few decades and is now regarded as threatened. The Wyre Forest is one of its strongholds because the woodland is carefully managed, with areas regularly coppiced to allow the growth of the wild flowers which are food plants for the PBF – as you can see here, it’s especially partial to bugle nectar. It’s now quite late in the PBF’s season; it’s an early-flying butterfly, and within the next few weeks will have disappeared, to be replaced by the very similar Small Pearl-bordered Fritillary. In fact the two species overlap, and I was only certain that this was the larger type once I had uploaded my photos and could check the under-wing markings.

As well as PBFs, the bank was playing host to some very tiny “butterflies”, which I couldn’t photograph because they were too quick and didn’t come to rest. However, on the return leg of the trail (which is much more difficult, as it follows a narrow, stony and sometimes quite steep path along the side of a brook) I happened to spot one on a bramble leaf, and managed the shot I’ve added as an extra. Shortly after this I came across a man sitting by the side of the trail and using a pheromone lure to try to attract clearwing moths, and as we chatted I described my tiny butterfly to him and he kindly explained that it was Pseudopanthera macularia, the Speckled Yellow moth. I’m not sure I approve of moths impersonating butterflies – I have enough trouble identifying bugs as it is – but at least this is one I’m not likely to forget. 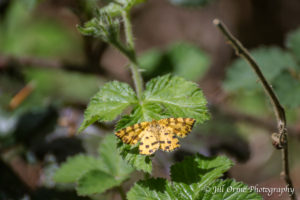 The same man helped me out again about an hour later, when I had got myself lost for about the fourth time (in my defence, the markers for that particular trail are shockingly bad – I feel that I should have a Serious Word with someone about it), and as I was retracing my steps to try to find the right path I bumped into him and received directions back to the car park which even encompassed the species of birds and bugs I might hope to see at various points. In fact I met quite a few nice people today, and had several pleasant and informative chats – it’s clear that regular users of this nature reserve absolutely love it and want to share their knowledge of the place with newcomers, which is charming, I think.

What with getting lost repeatedly, and stopping to chat to people, my two-hour walk turned into a five-hour walk, and the expression toadally zorsted doesn’t even begin to describe the way I’m feeling right now. But places like this are good for the soul, and despite the state of my knees and the shoulder that was taking the weight my camera bag, I’m really glad I spent a day in the Wyre Forest – I’ll certainly be going over there again soon. I’ve put a few of today’s photos in an album on Facebook, which you can access here if you’re interested.