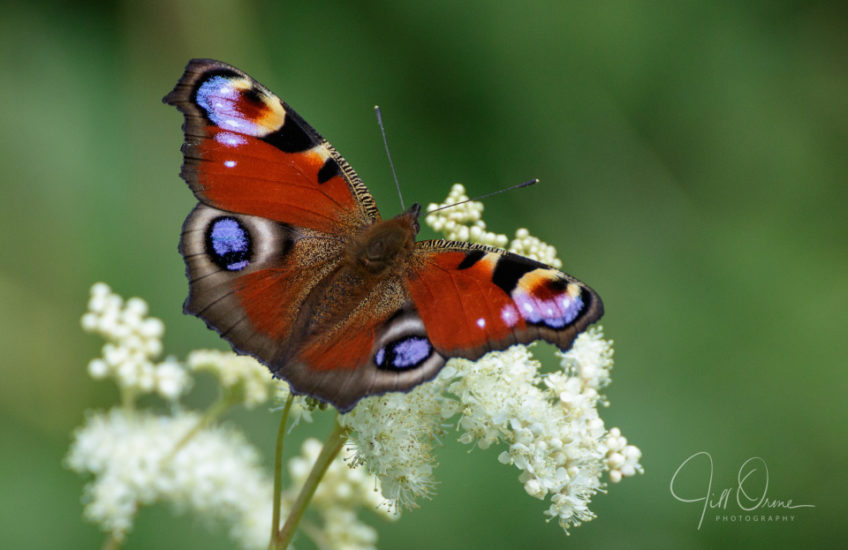 Continuing my rather haphazard exploration of the various nature reserves managed by Worcestershire Wildlife Trust, I went over to Pershore this morning and took a walk around Tiddesley Wood. During the second half of the C20th this site (which was once a deer park for the Abbey of Pershore) was run as a commercial enterprise by the Forestry Commission, during which time it was heavily planted with conifers. Since it has been taken over by WWT the conifer plantations are gradually being felled and replaced with broad-leaved trees, with the aim of returning the wood to its ancient state, and providing appropriate conditions to support a range of plants and wildlife. It’s readily accessible, with a car park, and the broad rides seem to be very popular with Pershore’s dog walkers as well as with photographers. It didn’t take me long to realise that this wasn’t ideal macro territory: the swathes of herbaceous plants along the edges of the rides are at least a couple of metres deep, and in many places much more than that, and I was often too far away from my subjects for a 90mm lens. Luckily I had the 70-300 in my bag so I switched to that, and used it at 300mm for the rest of the morning.

I’d hoped to see a couple of species I’ve never photographed before – the Common Clubtail dragonfly and the Noble Chafer beetle – but failed to find either; we’re coming to the end of the dragonfly’s flight period, so that wasn’t too surprising, but the lack of chafers was a disappointment. They supposedly hang out in numbers on umbellifers such as hogweed, but maybe no-one has mentioned that to them. I’d also hoped to capture a better photo of a White Admiral than I managed last week in Grafton Wood, but I couldn’t find any of those either – which gives me a good excuse for paying another visit very soon.

What I hadn’t been expecting to see was the Silver-washed Fritillary, but I spotted one basking in a distant tree almost as soon as I entered the wood, and several others whizzed past me as I was walking; they only have a two-month flight period and are therefore in breeding mode, which means that they spend most of their time on the wing searching for mates and only come to rest briefly when their energy gives out, but I did eventually caught up with a couple of them feeding (restlessly) on teasel. Far easier to photograph were the many Peacocks and Red Admirals which seemed to be absolutely everywhere I looked – as these are both species that overwinter as adults, they were very busy feeding in order to build themselves up, and I especially loved the way this one looked as it browsed the meadowsweet.

If you’re interested, I’ve put together a Facebook album of some of my favourite shots from today’s walk.