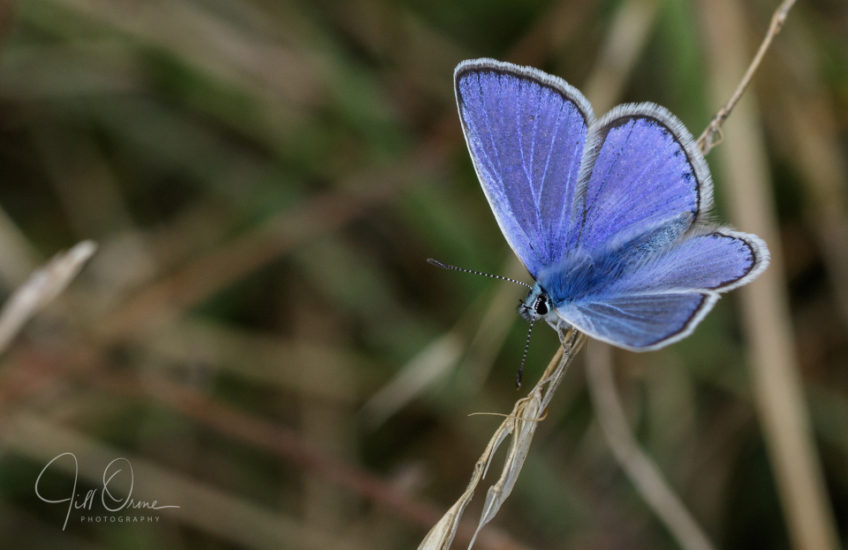 My prediction yesterday that I would be able to find the Brown Argus again proved to be correct: it was in almost the same place today where I photographed it yesterday, and it was definitely the same individual because it has an odd patch of white on the upper surface of one hindwing. It’s rather sad that it appears to be the only one of its kind in the entire meadow – I hope that some others emerge before too long.

It did have company today though. This field slopes upwards quite steeply from east to west, and the upper and lower parts are quite different in character: the upper part is much bleaker, with a lot of bramble and thistle, and the lower section, which buts up to the garden fences of a row of houses, is grassier and feels more sheltered. At the weekend the Common Blues were all in the upper part of the meadow, but today it was blowing what in some places would be called a hoolie, and the whole clan had moved down the slope to the grassy area which yesterday belonged entirely to the Brown Argus. What was interesting, seeing them together, was how small the Argus looked alongside the Blues: the wing span of this Blue would be about 35mm if it were basking with them spread (instead of clinging to the grass stalk to avoid being blown away, and periodically snapping them shut to present a smaller area to the gale – see the first extra), whereas the wing span of a Brown Argus is less than 30mm, and when folded the wings are only about the size of a finger nail. 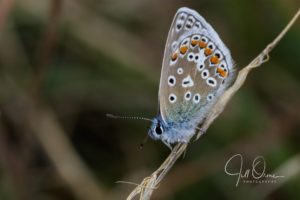 I’ve put in a second extra today, which isn’t a great photo, but is hugely exciting to me, because even though I’ve been on the planet for nearly six decades, and have lived in the north, south, east and west of England, this is the first time I’ve ever seen a Small Copper (Lycaena phlaeas). The thought process went something like:

I got eight shots in before it scarpered, not to be found again, and seven of them were either out of focus or had grass blowing across between the camera and the butterfly, or both. But they were still good enough to establish that it was indeed a thingy, and in fact, the very same thingy that I was saying to admirer only a couple of days ago I’d only ever seen in photos. 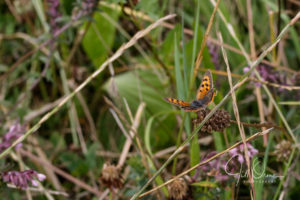