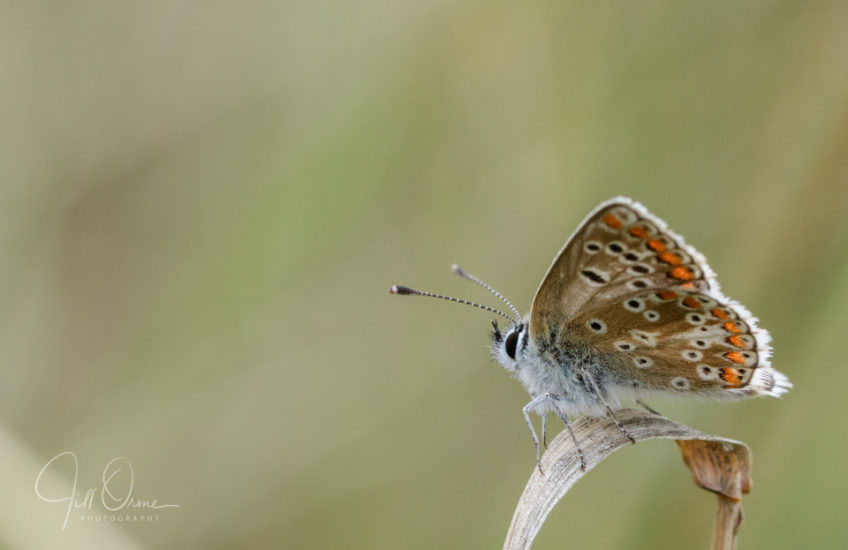 At first sight I thought it was an especially brown Common Blue: as you can see from the extra, the top markings are very similar, and there is a faint blue tinge to the fur. But a memory was tweaking at my brain of BlackTulip seeking a butterfly identification one day last week from the British insects group on Facebook, so when I got home and uploaded my photos I delved around in my books and on line, and eventually decided that in fact it’s a Brown Argus – a first record of this species for me, though they’re not at all rare. Despite the name it’s classed as one of the blue butterflies.

The underwing markings of the two species are very similar, but there are two differences: firstly, in the Common Blue there is an extra spot on the forewing, between the elongated splodge and the body edge; and secondly, in the Brown Argus there are two spots on the hindwing that are so close together as to almost form a figure 8, while in the Common Blue these spots are completely separate. Male and female Brown Argus are so similar that I haven’t even tried to decide which this is, but if anyone can tell me how to differentiate the sexes I’d be very happy to learn.

As the size and markings suggest, Brown Argus and Common Blue are quite closely related, and it’s said that they even roost together (though in summer I’m unlikely ever to be up early enough to test that theory). Brown Argus are apparently more passive though – they prefer warm, sheltered spots, and don’t tend to wander far from wherever they’ve emerged, so there’s every chance that the next time I walk through the butterfly meadow I’ll be able to find this one again quite easily.