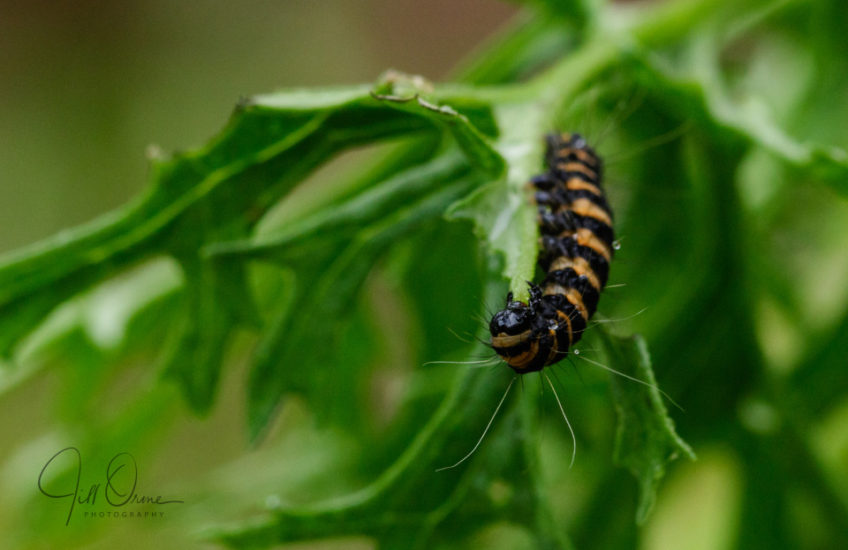 I forgot to mention yesterday that when I got home from Stratford and went into the garden to collect the wind-broken stem from my hydrangea, I also checked over the ragwort plant I’ve been tolerating; it has now fallen over onto the lawn under its own weight, which I knew would annoy He Who Mows, and I thought that I might have to dig it out and compost it. But to my delight I found that it was playing host to at least a dozen Cinnabar caterpillars – allowing the plant a month-long reprieve while the larvae feed and fatten. R responded to this news with amusement, and said that he would just mow around it.

Today however was not mowing weather, nor indeed photography weather either: it heaved down for much of the day, and by tea time I was still blip-less. Eventually I decided that I was just going to have to take wet photos, and squelched off out into the garden, making straight for the ragwort – but no caterpillars were to be seen. It took several minutes of intense searching in quite poor light before I found any, and they were all stretched out underneath stems, evidently sheltering from the rain.

Who knew? Caterpillars, it seems, don’t care for being rained on.

Apart from this chap, which I finally spotted, ignoring the weather and munching away like a true boss. None of the larvae is bigger than 2cm in length at the moment, and some are only about 1cm and very thin and pale, but Boss Baby looks fat and healthy and probably not far from its first moult. I will, of course, try to catch that process if I can.

The extra shows one of the mimsy babies, sheltering in a tangle of stems but still somewhat damp. 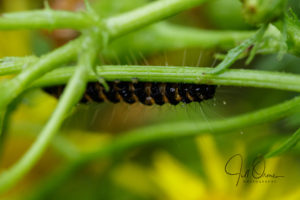