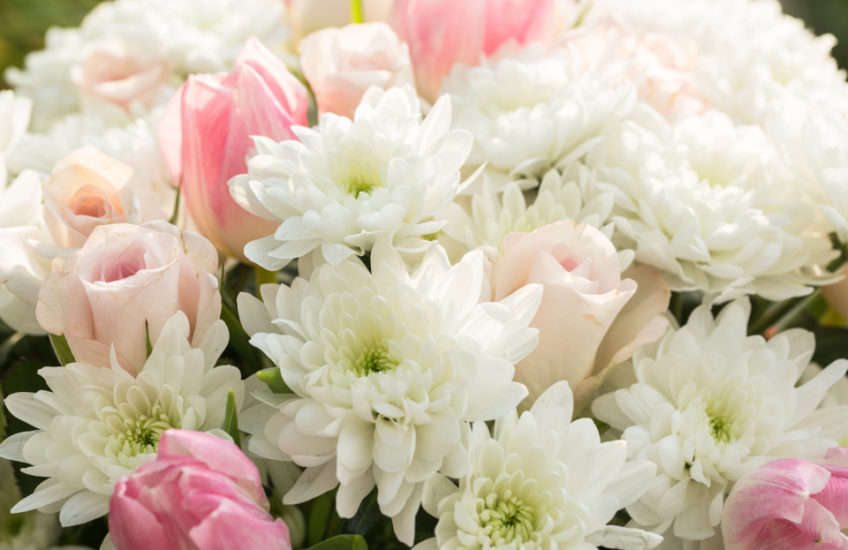 What is it with tulips?

Answers on a postcard, or a sealed-down envelope please.

That sealed-down envelope used to worry me terribly as a child: what if the people receiving it didn’t realise that it was standing in for a postcard, and ripped it open to get at the contents, thus destroying your competition entry? On realising their mistake, would they get some Sellotape and repair the damage, and would your entry still count if it had been defaced in this way?

It’s no wonder I was the only six year old insomniac in the village.

Anyway, tulips: they keep growing. Why is that?

The tulips I bought a fortnight ago grew by about 10cm in as many days – in the end I had to take them out of the vase and re-trim them, because they looked frankly ridiculous, towering over everything else. When I pointed this out to R he was relieved, I think – he’d thought that was simply my idea of a nice flower arrangement.

I bought these rather pretty pink and white tulips, bud roses and chrysanthemums in Lidl in Evesham yesterday (don’t judge me – the entire jugful was only a fiver), and once I’d trimmed and arranged them they presented a nice pastel dome to the world. By this afternoon however, the tulips were already visibly breaking ranks. R came into the conservatory while I was setting up this photo, and was amused to find me in full Gumby, and using some rather un-pastel language.

I noticed that though the roses and chrysanths came with sachets of cut flower food, the tulips didn’t – and I wonder if that’s because given the chance they scoff the lot and take off like Jack’s beanstalk?