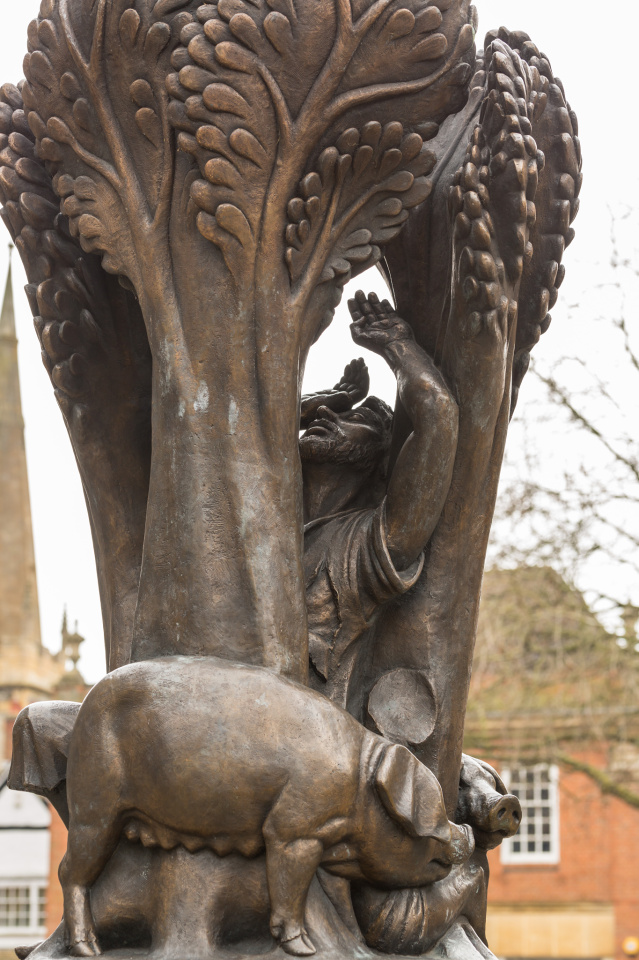 I’d been hoping to get out and about today, but although fine it was a cold and dreary day, and in the end I spent the morning working on my on(and on, and on, and on…)going project:

Specifically, for reasons vastly too tedious to bother you with, I’ve found it necessary to take the gallery back to square one and start over with it. So today I went through several months-worth of raw files, selecting images and exporting them at an appropriate resolution (and in quite a few cases completely re-processing them first). I’m sure it will be worth it in the end (said she, through gritted teeth).

By early afternoon I was stir-crazy, so I decided to pop into Evesham to pick up some flowers, and take a set of images for this week’s assignment in A Year With My Camera. The journey proved to be more exciting than I’d anticipated, because much of the Vale is still under water from Tuesday night’s flash flooding – but the roads were passable, and I still have painful memories of my last session photographing the Vale under water, so I ignored the blipportunities it offered me and pressed on to the Sham.

This statue stand in the town’s Market Square, and represents the swineherd Eof, after whom Evesham is named. Are you sitting comfortably? Then I’ll begin…

Eof was employed by Egwin, the Bishop of Worcester, at the beginning of the C8th. One day, while searching for some lost pigs in a forest on the banks of the River Avon, he saw a vision of the Virgin Mary and her two attendants. Eof rushed to tell his employer what he had seen, and Egwin (who knew a good thing when it was presented to him with apple sauce) went to the same spot and prayed – and was also blessed with a vision of the Virgin, who told him to found an Abbey on the spot. Which he duly did, and became its first Abbot. He apparently decided (in a spirit of egalitarianism rare in the Dark Ages) to name the Abbey, and the town which grew up around it, after his swineherd.

I’d be lying if I said that I didn’t have one or two issues with this story – but it’s absolutely logical and credible compared with the other famous story about Egwin, which involves a set of chains, a padlock, and a key thrown into the River Avon and later extracted from the innards of a fish caught in the River Tiber in Rome. I suspect that Egwin was also pretty slick with the three cups trick, but luckily for him he lived in more credulous times, and he was eventually canonised.

The statue was chosen by popular vote and financed via public fundraising. It was sculpted by John McKenna, and was installed in the Market Square in 2008. Because I was using a fixed telephoto lens I wasn’t able to get a shot which included both Eof and the subject of his vision, but I might try for that with a wide-angle another day. If you can’t wait, there are some interesting photos here.