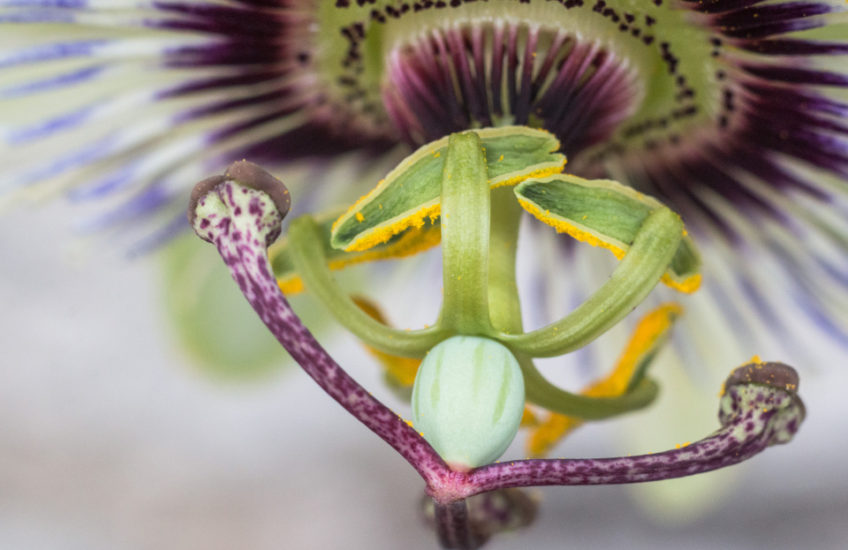 Back in the spring I bought a beautiful passion flower called ‘Blue Sky’ – I was delighted with it, but it failed within a couple of weeks of being planted. It was obvious that the stem had been damaged just above ground level, but it wasn’t clear whether some small furry creature of the night had been snacking on it, or if I’d accidentally done the damage myself while disentangling it from the frame around which it was (unhelpfully) wound. So I didn’t feel that I could take it back and ask for a replacement.

Instead I got this one, which is called ‘White Lightning’ – it’s not as pretty, but it was a larger and more robust plant when I bought it, and since being planted against the yard wall it has romped away. It’s now competing for space with the larger of our two grape vines – which I should also blip really, as it’s covered with succulent (though extremely sour) bunches of grapes. If the Gloire de Dijon rose stops sulking next year and puts on a decent amount of growth, the ugly old yard wall will be pretty much covered and I’ll feel almost like a proper gardener.

There’s an extra today, which shows a honey bee exercising more determination than sense. Over the past few weeks I’ve blipped a couple of shots of hoverflies eating from the tiny flowers of Heuchera ‘Marmalade’, and flying told me that in her garden in New Zealand the bees also try to feed on heuchera flowers, despite being too big. I’d never seen this happen, but this afternoon I was photographing a hoverfly – from quite close in because I had the 31/13mm stack on the 85mm lens – and I suddenly heard very loud buzzing and realised that a honey bee was also on the ‘Marmalade’ plant, and apparently getting quite cross. 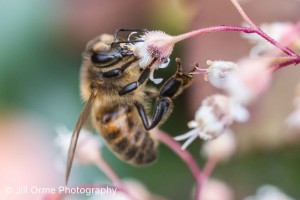 I managed a couple of shots of it before deciding to retreat and leave it alone; neither is particularly sharp, but in my defence the dof was very shallow and the bee was moving fast and unpredictably. It was determined to have the nectar from these flowers but was really struggling to get a good enough grip to feed, and changed its position every couple of seconds. In my other shot it’s managing to spread its weight between two adjacent blooms, but R liked this one in which it’s clinging on with its front legs while the back ones wave in space.

Apart from a small amount of admin and quite a lot of photography, the main thing that happened today was that I washed and prepped 2kg of sloes; this took quite a long time, but they’re now safely steeping in four litres of gin, alongside the litre of damson gin that I set going a couple of weeks ago. Then this evening I went to the first choir rehearsal of the winter season – at the next concert in November we’ll be singing Mozart’s Ave Verum Corpus, Te Deum, Regina Coeli K108, and Coronation Mass in C.  I always think that Mozart is easy, until I start trying to learn it!