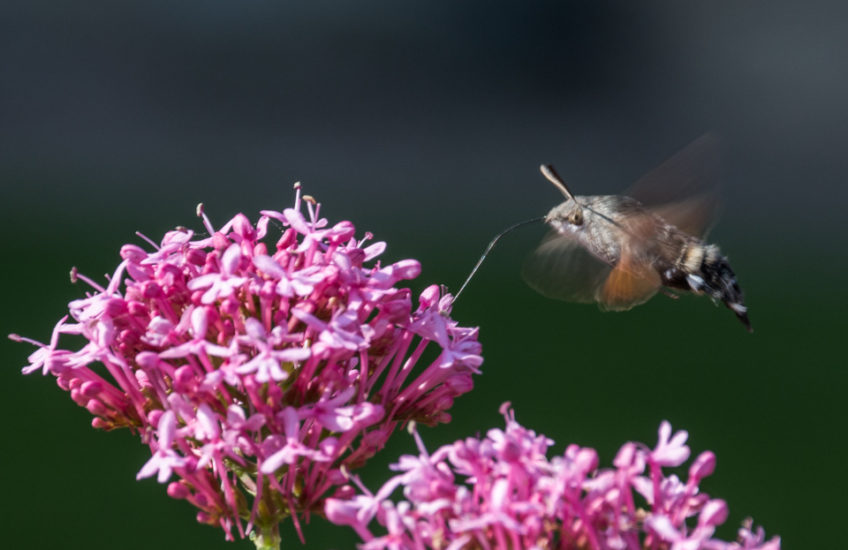 I ditched several perfectly creditable flower shots to post this slightly blurry image – but given that it’s the first time I’ve even seen a Hummingbird Hawkmoth I’m sure you’ll be understanding about it.

It was lovely in the garden this morning, but having taken my flower photos I thought it might be interesting to learn how to do stitched panoramas, so I took a quick drive up the Cotswold Edge as far as the Broadway Tower and came back with several sets of landscape shots. I made a quick cup of tea and was on my way upstairs to the computer, when I remembered that as I was leaving I had seen a Brimstone butterfly feeding (for the second time this week) on the centranthus growing in the garden wall – so I doubled back and went outside, just to check if it was still around.

It wasn’t, but while I was standing there this little chap appeared. As I said earlier I’d never seen one before, but I knew what it was, and I literally spun on my heel and ran for the camera. As I grabbed it from the stairs and ran back I realised that I had completely the wrong lens on it – I was using the 18-250 to take my panorama shots, and though it’s a pretty reasonable lens and very useful for general stuff I wouldn’t ever use it for bugs. I also knew that my shutter speed had been set for landscape work at 1/125 sec – it’s possible that some undecorous language might have been used at this point, but the moth was moving so fast from floret to floret that I thought it would probably finish with the plant and leave pretty quickly, so I didn’t dare stop to change my settings.

I took 44 shots between 3.22pm and 3.24 – and then with no warning it curled up its proboscis and went. When I uploaded the files to the computer I was watching the previews through my fingers – and when this one came up I knew I had my shot.

I hope it won’t be the last time I ever see a Hummingbird Hawkmoth – and that the next time I’ll have a better lens and a faster shutter speed to work with – but for today I’m content with this. I’ve kept a few others out of the 44, which will be going on Facebook later – and if I get round to it I’ll put them on Flickr too.

The funny thing in all of this is that the Centranthus almost wasn’t there. It’s generally known in this house as “That bl**dy pink stuff that seeds everywhere”, and for the past fortnight I’ve been meaning to cut it down but not quite getting round to it. But in the past three days I’ve photographed a Brimstone and a Small Tortoiseshell butterfly, and now this moth, all feeding from it – so despite its determination to take over the garden I think it will have to stay!

There’s more information on the Hummingbird Hawkmoth here, and also some stuff about Moth Night (which sadly I think I’ve left it too late to participate in this year, unless you can paint your trees with sloe gin).