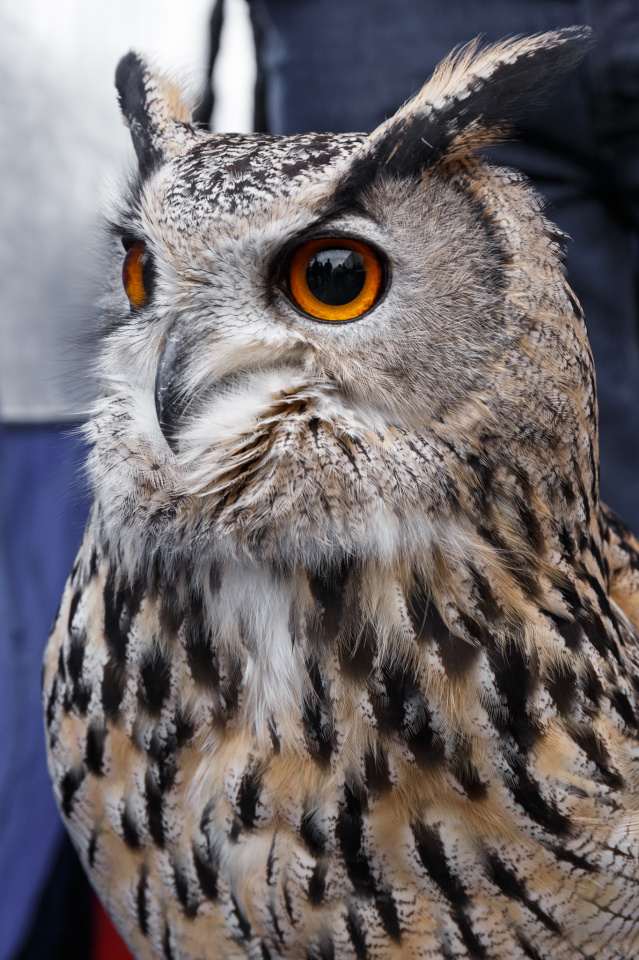 R and I were wandering through the Christmas Market on Bridge Street in Stratford this afternoon, when we came across the Midlands Bird of Prey Rescue, making one of their regular fundraising visits to the town. Peter Collins, who has been involved with the Rescue for 20 years and now runs it, had brought four owls with him – all captive-bred, and now permanent residents of the Rescue as their previous owners couldn’t keep them, for a variety of reasons.

This, I believe, is an Indian Eagle Owl, and though it’s appreciably smaller than the Eurasian Eagle Owl which he also had with him it’s still a pretty fearsome creature. Mr Collins assured me that neither of his Eagle Owls would attack as they’re completely used to being handled; but I still kept a respectful distance. I did stroke the Tawny owl though, and it was delightfully soft – and completely unimpressed by my attention.

By the time I’d finished chatting to Mr Collins and taking a batch of photos, R and I had both completely emptied our pockets of coins into his collection bucket. There are more photos here.

Just to update you on yesterday’s Flying Cyclist story: this morning I spoke to the County Council Highways Department, and was given an email address to which to send my report and photos of the rutted road surface; but on the way home from Stratford this afternoon R pointed out that I didn’t need to send them, because the road has already been patched. I find this pretty impressive!