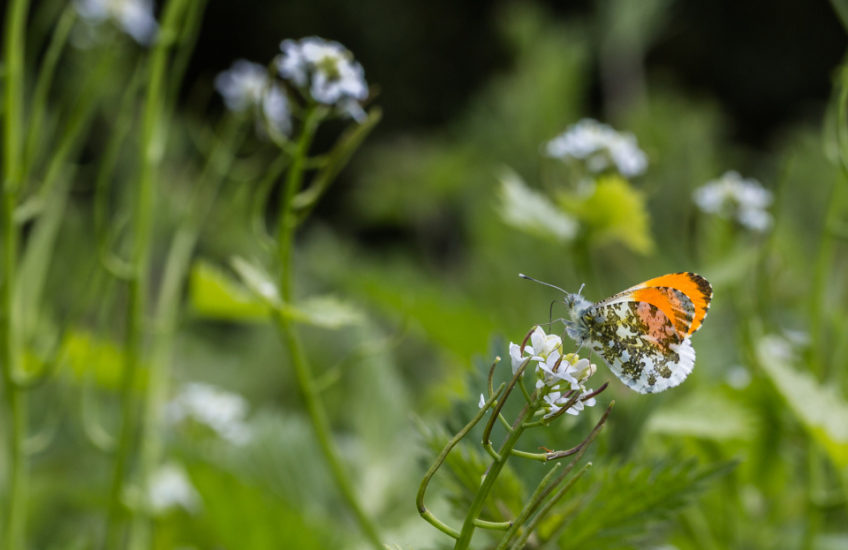 This morning my disinclination to waste good photography time on gardening met my mounting stress over the state of the front garden head-on, and lost. Luckily, knowing that my hands are quite rheumatic at the moment, R insisted that he should do the worst of the weeding, and between us we cleared out and edged the whole of the longer border. It doesn’t sound like much when I put it like that, but it probably amounts to as much flower bed as you could get around the back garden of a new estate house.

Yesterday I put out a container of beer next to one of the heleniums I planted last year, the new shoots of which have been repeatedly taken off to ground level by slugs this spring, and today I was interested to see that several of the little beasts have drowned themselves already. My live-and-let-live attitude to most garden pests doesn’t extend to slugs and snails, which eat the tops of plants until they just give up and die, or to ants, which destroy the root systems by excavating through them – though I really don’t feel good about killing anything.

After gardening I felt that I deserved a photo safari, and with the light quite good it seemed worth breaking out the Big Lens. I took a few reasonable photos of the pair of starlings which are nesting in the roof space above my study, and which are clearly raising young already – both parents made repeated trips to fetch grubs back to the nest hole and were met with loud twittering on each return, though one huge worm was rejected and removed again by the adult which had brought it. I was also interested to see that the adults quite often remove debris from the nest when they leave it, including an enormous lump of poo on one occasion.

I’ve been stalking Holly Blue, Orange Tip and Brimstone butterflies for a couple of weeks now, but Friday was the first day when I saw any of them come to rest, and I was so far away that my shots had to be cropped almost to extinction. Today I was hoping that the Big Lens would give me a better result, but though I stood and waited for maybe half an hour all the butterflies that were working the verge opposite the house were in constant motion. Eventually I gave up and took the 70D and Big Lens back into the house, and as I went back out to collect the 5D and macro I saw this Orange Tip come down – which I believe is Someone’s Law. Rather than wasting time going back for the other camera I walked slowly over to the verge, stopping and shooting every few steps, and managed to get reasonably close before a horse transporter rumbled past and startled the butterfly into flight.

I hope very much that this won’t be the best shot I get this season of a wild butterfly, but for today it will do.