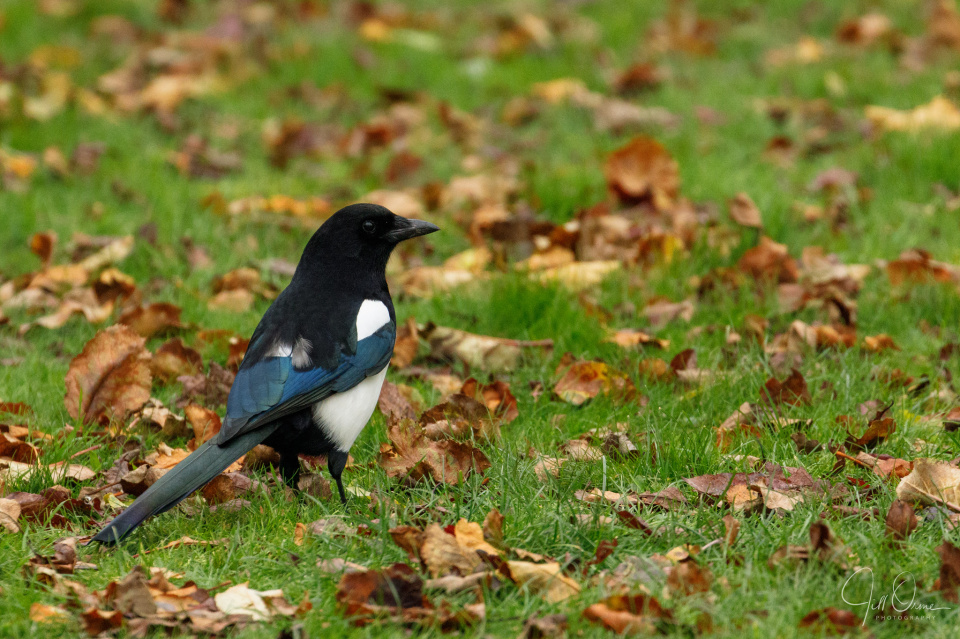 One for sorrow, two for joy.
Three for a girl, four for a boy.
Five for silver, six for gold.
Seven for a secret never to be told.
Eight for a wish, nine for a kiss.
Ten for a bird you must not miss.

I like magpies, and I think they have an unfairly bad reputation – yes, they will take eggs and young from other birds’ nests, but so will all the corvids, as well as some other birds such as great spotted woodpeckers, when they have chicks of their own to feed. It’s harsh on the victims, but it’s a matter of survival. For many years this species was especially persecuted by gamekeepers, but since that no longer happens the population has increased, without any evidence that it’s depressing the numbers of other birds.

In my experience magpies are the most nervous of the corvids, and therefore the hardest to photograph, which is a shame because their plumage is lovely. The two in my garden today were first winter birds, I think, and probably siblings, and they were especially skittish – they were desperate to get some of the ground food I’d just put out, but they knew I was standing in the shadows of the kitchen watching them, and they took off every time I so much as twitched a muscle. In the end my persistence and their hunger go me a handful of reasonable shots showing the blue-green iridescence on their wings and tails, and then I shut the door and left them in peace.

By the way, if you’re of a superstitious disposition you may be pleased to hear that you can completely neutralise the bad luck of seeing a single magpie by tipping your hat to it, and saying “Good morning, Mr Magpie.” I’m not personally superstitious, but I do this anyway because I think it’s good manners.