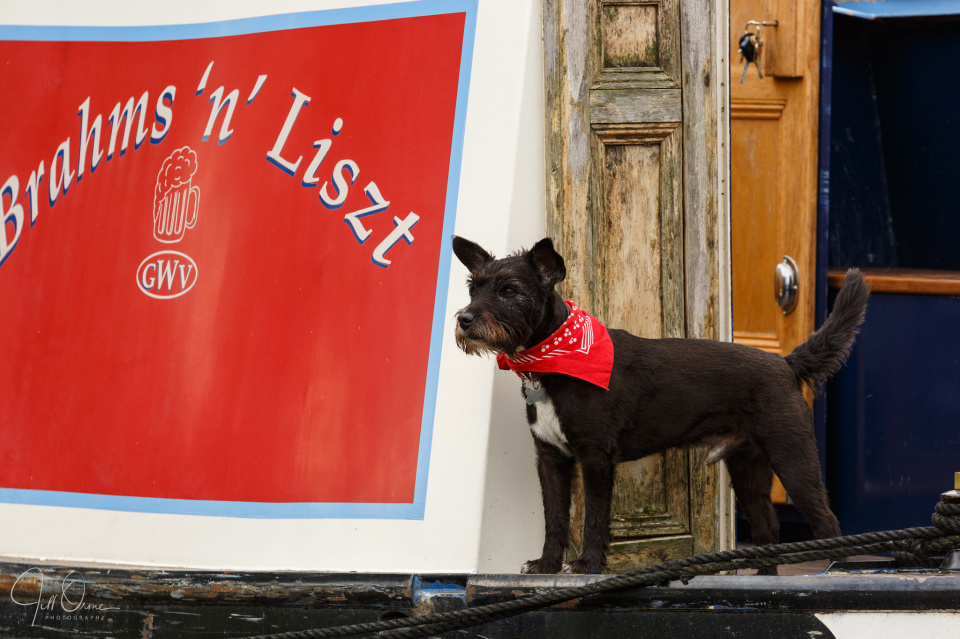 The old sea dog was wearing a thousand yard stare: about a thousand yards away was a funfair, from which the sounds of children’s voices could clearly be heard, and he was contemplating making a break for freedom and becoming a land lubber. Or possibly it was the intervening park, in which other dogs were socialising and being busy, that was the draw.

The gap between the edge of the barge and the quayside was quite small, but there was also an appreciable drop. He would peer over the edge, then back up, trot determinedly forward…. and stop on the edge, one front paw raised but bum going involuntarily into reverse. Then he would look around, eye the sniggering photographer with disfavour, decide that this time he really was going… and repeat the process all over again.

I had no business laughing at him, given that this is exactly the way I behave when the people in the swimming pool are calling out helpful things like “Just jump! The water’s really not that cold once you’re in!” And that’s with no risk of me mistiming the jump and winding up in the river Avon, or squashed between boat and quay. I did wonder if I should alert a human to the scheme he was hatching, but no-one was visible, and after I’d watched the performance for several minutes I decided that he was stronger on planning than delivery, and there wasn’t really much risk that he would follow through.

I don’t know the old sea dog’s name, but if he were mine I would call him Bruce. I don’t know why – it somehow just seems to suit him.