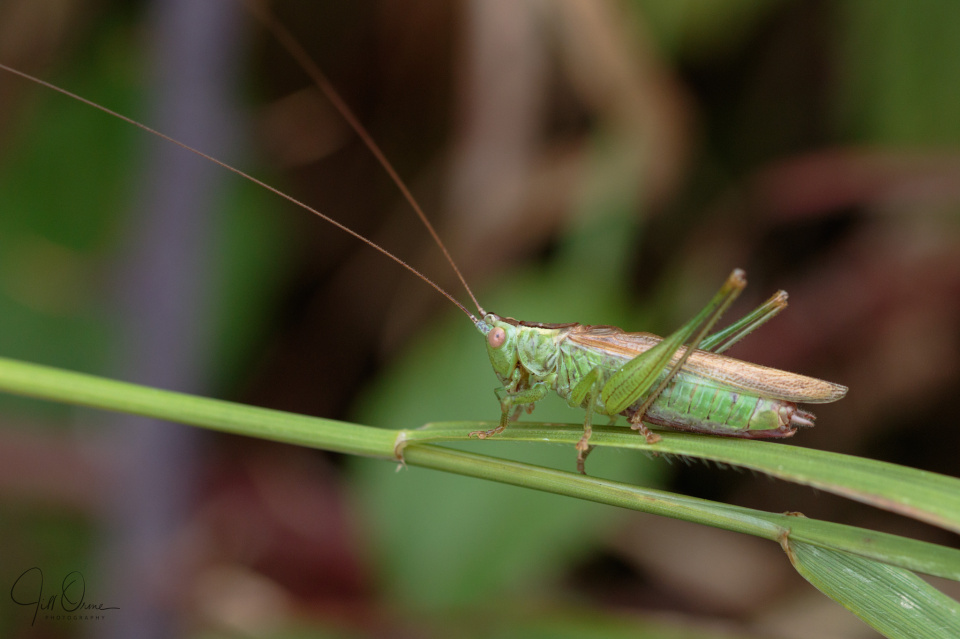 I had a bit of a conniption fit this afternoon, when I lifted my head out of Lightroom, where I was completely reprocessing a folder of photos I took on a holiday four years ago, and realised that it was after 4pm, the light was horrible, and I hadn’t yet taken a single new photo. I stuffed feet into shoes, grabbed the macro, and scuttled off up the village in search of a bug – but it wasn’t really bug weather, and the butterfly field yielded nothing at all for the first twenty minutes I was there.

Happily, when I did spot something, it turned out to be interesting – to me, at least! By now it’s fairly unusual for me to find a creature in this field that I’ve never seen there before, but this is such a beast, and because he didn’t absolutely match any of the photos in my Orthoptera book, I had to check his identification on line. He’s a Long-winged Conehead, a species of bush cricket that was first recorded in the UK in 1931, but which has spread steadily northwards, and is now found everywhere south of a line drawn from South Wales through to the Humber estuary.

The female Long-winged Conehead bites a hole in a hollow stalk of grass and inserts her long, slender ovipositor to lay her eggs. These hatch in the late spring, and the nymphs pass through five instar stages before finally maturing in the late summer; if not predated, the adults can survive until the late autumn. This species isn’t fussy about habitat, is omnivorous, eating vegetation as well as small insects, and because it’s fully-winged can also fly – all of these characteristics probably contributing to its successful colonisation of the south of England.

There’s a dispute about the proper Latin name for the species, but even I got bored part way through reading about it, so I’ll spare you the details. I’ve used both names in my tags, if anyone cares.