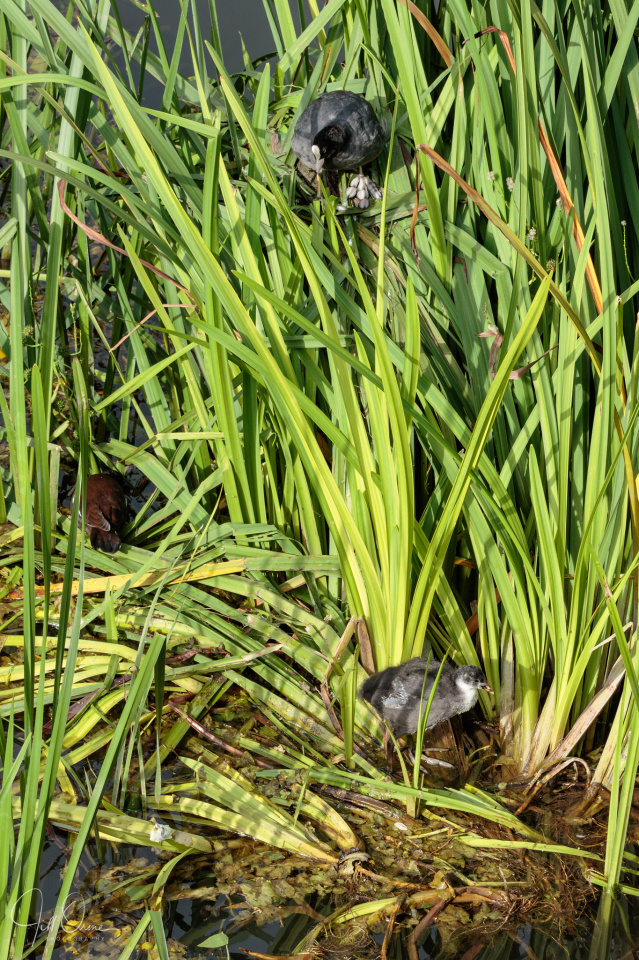 We went to Northamptonshire today, to have lunch with C and I, who are very old friends – to be fair, I’ve only known them both for twenty six years, but I and R have been friends since meeting on holiday when they were in their teens. C has been battling multiple sclerosis for many years, but is as feisty and funny as ever, and they make a great double act: as well as a delicious lunch we enjoyed several hours of Competitive Talking (my favourite sport), and much laughter. ‘Twas a good day.

On the way home we stopped off in Stratford to walk along the river in the nice late afternoon light, partly to get in some steps to balance our excessive lunch intake (we have no self-control, sad to say), and partly so that I could look for a subject for my blip. I was hoping (of course) for a dragon, but dragons were not to be found, and the most interesting thing we saw was this coot, perched on top of a clump of reeds. Because I took the photo from Lucy’s Mill Bridge the perspective is a little odd, but she was several feet above the water, and it wasn’t at all clear how she’d got herself up there – coots can fly, but it’s not their special skill and I don’t ever actually remember seeing one do it; and they don’t look to be especially well equipped for climbing either. In this photo she’s giving the evil eye to a moorhen which was invading her territory, and for a while I was hopeful that she would descend, either to sort out the marauder, or to comfort her chick (lower right of shot) which was bawling its head off – but sadly she stayed where she was and contented herself with shouting a few threats, so the question remains unanswered.

I was so taken by those big, ugly feet that I did some research when we got home, and found a blog post that describes coot feet (thank you, internet); the scalloped fleshy lobes along the toes serve to increase their surface area for swimming or walking on mud, but fold back when the foot is moving forward through the water so that they don’t provide backward drag. This is illustrated by an underwater photo in the post, which you can see here if you’re interested.