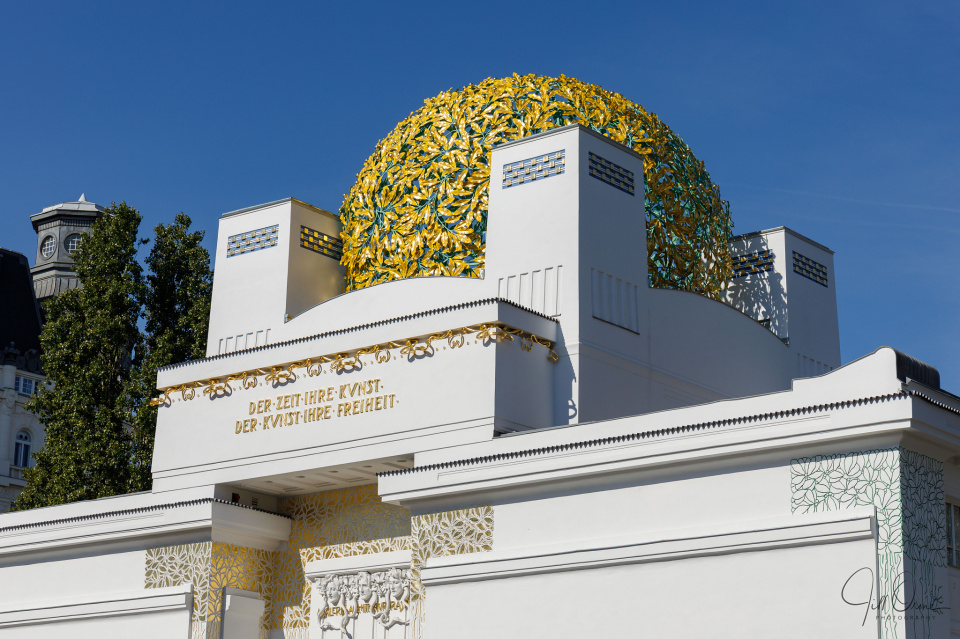 We were booked on an evening flight back to Heathrow, giving us most of the day in Vienna. Apart from the specific exhibitions we’ve seen, this trip has mostly involved revisiting places we’ve been to before, but sometimes that’s a comfortable thing to do, and today there were three more favourites that we wanted to see again before we left.

After checking out of the hotel we yomped off to the Belvedere to see their Vienna 1900 works, including The Kiss and some other gorgeous Klimts, as well as some very strong pieces by Schiele and Kokoschka. We then strolled back past the war memorial, whose fountain was creating a stunning rainbow in the strong sunshine, and through Karlsplatz, to the Secession Museum. R has chosen this shot to represent our day, simply because we both love this extraordinary building; but for contrast, if you’re interested, there’s a view of the Upper Belvedere here.

The last time we were in Vienna there was a special event going on in the Secession, for which a structure had been built in the basement to allow you to be on a level with the Beethoven Frieze; and I embarrassed myself by bursting into tears in front of the Ode to Joy. Today there was nothing to climb, so, as you can see in my extra, you just had to stand at ground level and look up at the frieze – but as R said, it was actually quite nice to be able to take in the whole thing in one glance. 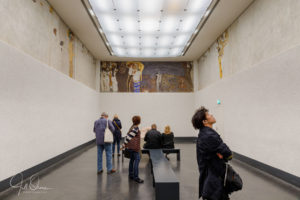 I didn’t cry this time, largely because of a fizzing fury I’ve been experiencing at intervals through the past three days: since my first ever independent trip to Europe in 1975 I have felt at home in almost every part of the continent I’ve visited, and it makes me utterly livid that my right to be in any one of 27 other countries is about to be wrenched away from me. So Ode to Rage would probably be more appropriate. I still love the Beethoven Frieze though, and was very happy to have the chance to see it again.

Our final port of call was the Café Museum, which R and I both think of as one of “our” places. We’ve eaten ourselves almost to a standstill since Wednesday – it’s hard not to in this city, to be fair – but we bravely attacked some cake and Aperol, discussed our trip highlights, and pledged to come back to Vienna as soon as we reasonably can.