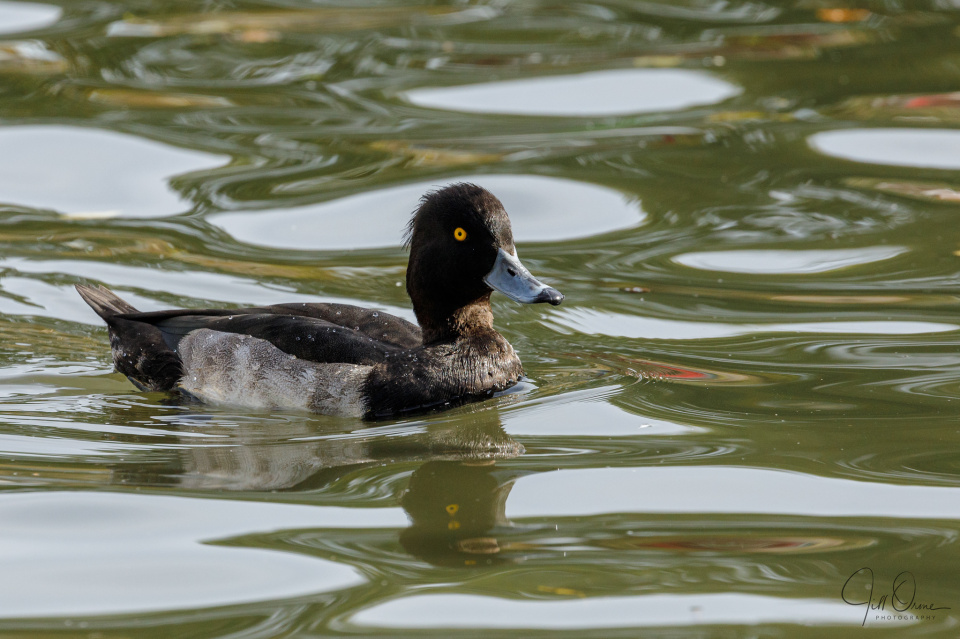 This morning was taken up with the usual slightly depressing post-holiday stuff, and then as we (luckily) had no food in the house, we went to Stratford for lunch. By this time I’d replaced the walkabout lens I used on the 5D for the past four days with the 100-400, and after we’d eaten I went in search of some nice light, and a subject.

I love the way this lens renders sunlight on the surface of moving water, so I was very happy that the sun was out (especially after the shock of arriving back in London at 10pm yesterday to 7°C and rain); and I was pleased to find this young male tufted duck hanging around the landing point on the north side of the Avon. He was watching the mallard/goose/swan scrum taking place closer to the quayside with interest, but as is usual with tufted ducks he made no move to join it – they’re quite shy birds, and tend to try to stay out of trouble, and they don’t seem to have the slightest interest in the food that humans throw to the other birds, preferring to dive for aquatic molluscs and insects.

My only slight concern was the fact that he was on his own, because tufted ducks are usually found in groups. But as R and I walked along the south bank of the river to get back to the car, we saw several others congregating over by the theatre, in the shade of some overhanging trees, and looking as though they were trying to keep themselves to themselves. So this one must, I think, be the bravest and most inquisitive member of the group.