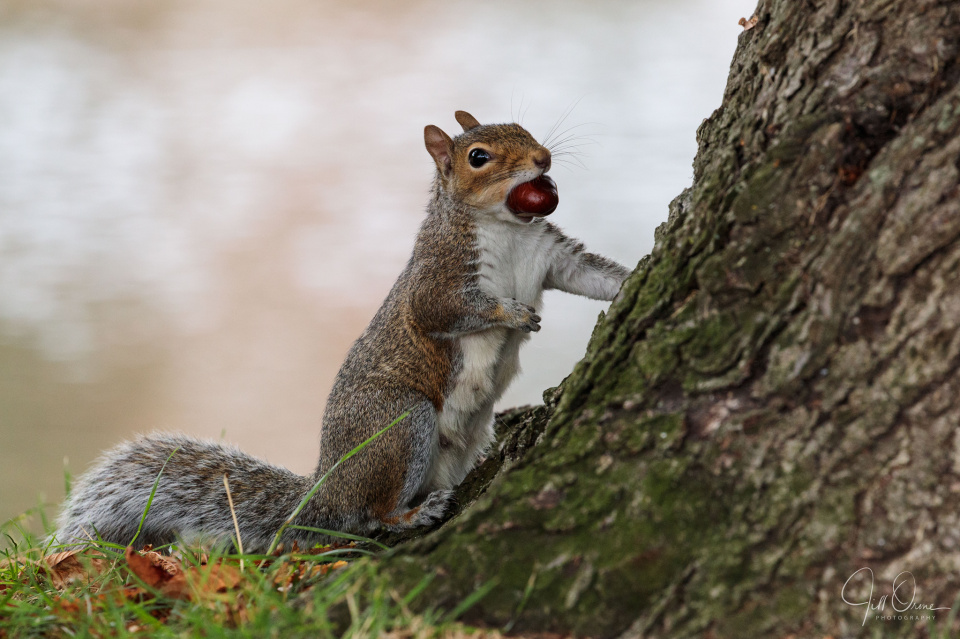 I was back in Stratford again this afternoon, in much less nice light than yesterday’s, but still finding plenty to photograph. I’d already walked the north bank of the river en route to meeting R for coffee, and had some pretty decent shots of both herring and black-headed gulls in the bag, so I was photographically relaxed as I strolled back along the south bank, knowing that I already had some postable images.

The Rec in Stratford is very heavily used, especially by runners and dog walkers, but is home to a surprising amount of wildlife, much of it seemingly fairly unworried by humans. I almost tripped over this squirrel as I went round a kink in the path, close to the chain ferry; she was searching the ground for food, and took no notice of me even when I dropped into a crouch and began taking photos of her. After a few seconds she found this horse chestnut, and was sitting up, turning it around in her paws, when we both heard footsteps and conversation behind me, as a couple approached with a small dog. I doubt she’d have reacted to the extra people any more than she had to me, but the dog was a different matter, and she froze.

At this point the people saw what was happening, and stopped to watch; their dog, which was on a lead and very well-behaved, didn’t seem interested in the squirrel, but she lost her nerve and fled. It was pure luck that she paused for a second at the foot of this tree to reassess the situation, giving me the opportunity for half a dozen frames before she bounded up the trunk and disappeared.

Knowing that the theme for today’s Mono Monday is Seasonal, I converted one of my other frames to mono with a view to joining the challenge – but in the end I prefer the colour image, so I’ve put the mono shot in as an extra. 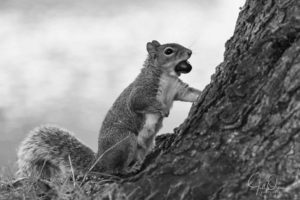