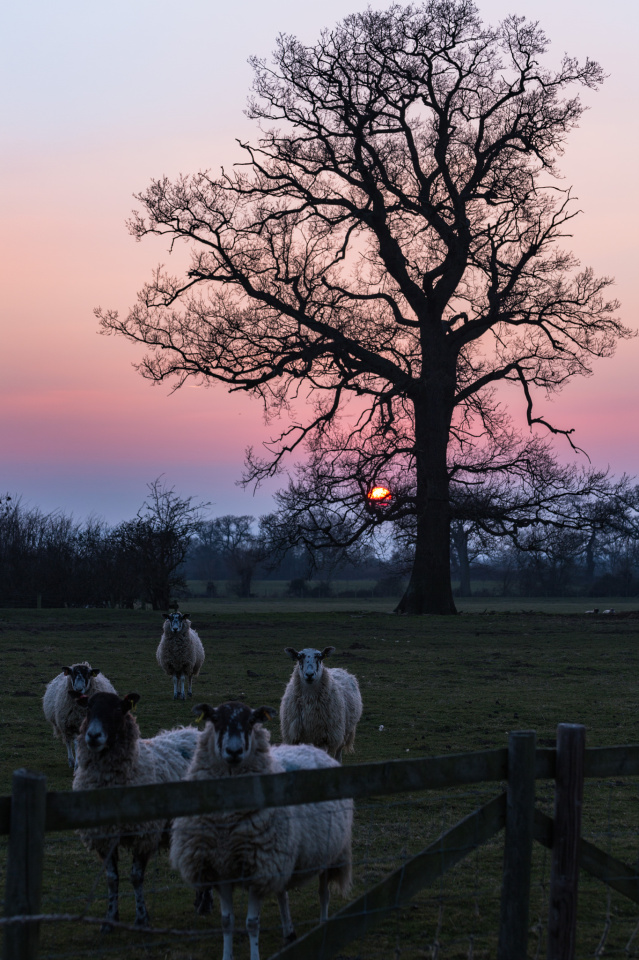 I was observing the sunset, and they were observing me. I was torn between amusement and feeling slightly unnerved: they stood so still and stared so hard that they almost seemed like aliens from a science fiction story. In truth of course, they were just wondering in their sheepish way what this human was doing, who wasn’t bearing food or any other useful thing and yet was not apparently threatening.

My plan to get out and about today fell under the wheels of computer faffery, and a couple of hours spent on line watching some utterly compelling coverage of the U.S. Presidential primary campaign, and I suddenly realised that it was late afternoon and no photos had been taken.  Luckily the light was quite good and there seemed to be at least a reasonable chance of a sunset, so I nipped out on a very brief road trip and came back about half an hour later with half a dozen shots I rather like. In fact I’ve spent far longer hovering over the finished photos, trying to decide which to post, than I did either taking or processing them. In the end I just couldn’t resist the sheep from Aston-sub-Edge – they still amuse me and that’s a good enough reason for blipping them, I think.

I’ve put in my other favourite of today’s photos as an extra. It was taken about ten minutes before the main shot, at Sheen Hill near Ullington – I take quite a lot of my sunrise shots from the other side of this hill, but rarely get to photograph it from this side. I was driving south down the Roman Road towards Aston, saw that the sun was just dipping behind the trees, and was luckily able to pull in and walk across to the field entrance to get the shot. I like the ridge and furrow pattern on the upper slope, though I’m not confident that it’s a mediaeval cultivation pattern: we have a field down in the valley which definitely shows old cultivation ridges, but they’re quite deep and widely spaced – these may just be a natural slippage pattern due to the slope, though it’s certainly possible that this land has been farmed for many centuries. It’s mildly interesting that maps call this Sheen Hill, but the road that runs along the south side of it is called Shinehill Lane (locally pronounced “Shinull”). 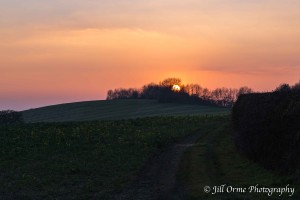 A third photo, taken just around the corner from here, was R’s personal favourite of today’s set, and will go onto Facebook shortly – so a day which had threatened to yield no photos netted a reasonable catch in the end.