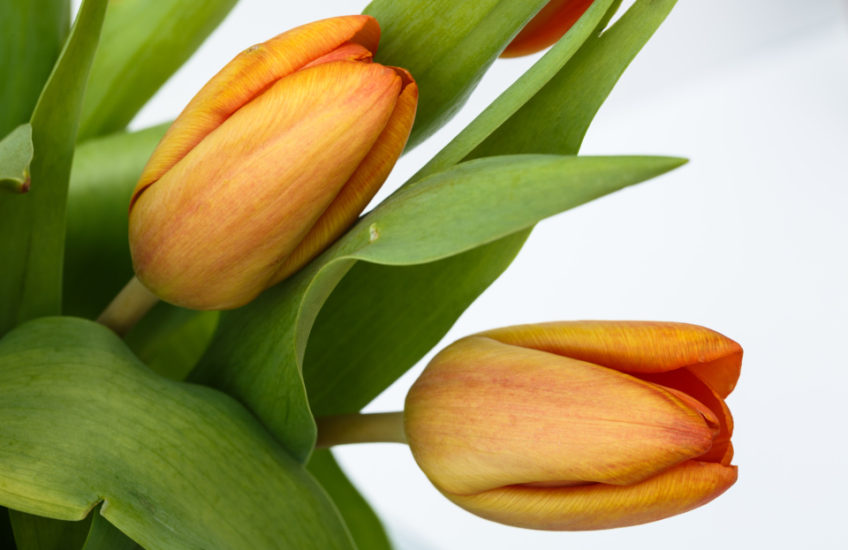 A word that describes equally well the colour of these tulips, the weather, and my mood for most of today.

Arthur, who had been doing very well on a combination of circulatory and joint medications, has seemed over the past few days to be failing rapidly. Already a champion sleeper, he’s been spending almost all of every day on the sofa in the snug, and has been increasingly reluctant to eat and largely uninterested in going for walks. As of 3pm today he hadn’t touched a mouthful of the food I’d put down for him at 8am – meaning that he hadn’t had any of his meds either – and hadn’t walked further than the closest piece of lawn for comfort breaks.

I spent quite a portion of the afternoon in tears, especially as I was emailing the groomer to explain that we wouldn’t be bringing him in tomorrow, but that I would let her know how the situation developed. I could only see one way in which the situation might be expected to develop.

Then at about 4pm R called upstairs that Arfie was now up and about, and expressing willingness to be taken for a walk. The two of them set off, slowly. Ten minutes later I was sitting at my desk and a movement outside caught my eye – I turned to look, and was astonished to see Arthur literally galloping along the road, with R running hell for leather behind him. By the time I went into the kitchen a few minutes later Arthur had eaten perhaps half of his breakfast; on seeing me he went into his treat dance, and every time I appeared for the next hour he did another little jig to try to entice more titbits from me. Which of course, he promptly received.

It felt as though our hound had been returned to us from the Underworld, and though I fear that he’s probably on a downward trajectory, it seems that he’s not quite ready to give up on life just yet. I haven’t taken him to the vet because it distresses him so much – and he’s not currently showing any signs of suffering. He just seems to be winding down, in a way some C19th death certificates term “senile decay”. As and when I think it’s necessary, I will ask for a vet to come and see him here.

This evening I’ve been over to Chipping Campden, to the final choir rehearsal for the St John Passion. If you don’t know this piece, you might like to listen to the final chorus here – it’s not a very good piece of film, and the sound is terrible, but it still conveys how lovely this movement is. Some choral works have always moved me to tears, and before I became a choral singer I would say to R, “What do you suppose it feels like, to be a part of that sound?” Well now I know, and if you’ve never done it yourself I can tell you: it’s wonderful. Sometimes it’s like meditating, and on occasion the joy is so intense that I have to remind myself to breathe. Of course, there are other times which are less uplifting: when the pitching or the timing goes awry in one or more parts of the choir, and the conductor looks as though he’s about to have a stroke – but even then it’s undeniably an exercise in mindfulness!

Before I go to my rest, thank you to everyone who was nice about yesterday’s Staring Sunset Sheep.