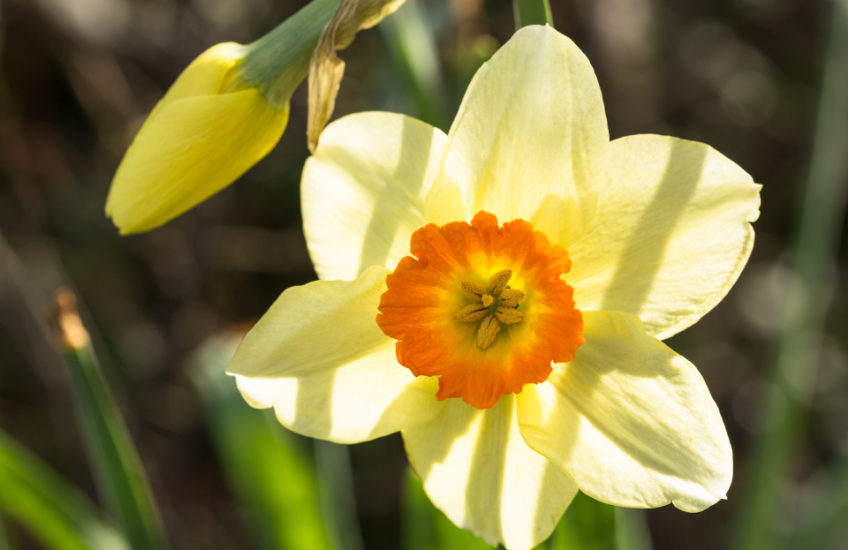 Did you know that there are thirteen recognised types of daffodil?

No, neither did I.

This, I think is a large-cupped variety: the corona or cup, which is the orange inner section, is quite large, but shorter than the outer petals (or perianth segments).

That’ll teach me to go searching the interwebs for information – I’ve just spent ten minutes of my life I’ll never get back reading screeds of stuff on the RHS site, and probably bored you to sleep.

Moving on. Because my life needs to be pretty centred around Bach for the next few days I didn’t venture far from home today, even though I’m feeling somewhat stir-crazy. Bach or no Bach, I may have to go out briefly tomorrow, if the weather holds – I can feel a bit of a tantrum brewing. Luckily you won’t have to witness it.

I donned layers and walked around the garden this afternoon in the bright sunshine and sub-arctic chill, still hoping for sight of an interesting bug. I may possibly have imagined it, but I thought I could hear the bugs scoffing at me from the warm safety of their hibernation nests, and suggesting that I might like to come back round about the start of May. In the far garden I disturbed one of the pheasants; I hadn’t realised he was there and nearly had a heart attack when he suddenly went ballistic at me. He then ran around the garden shouting for a good couple of minutes before deciding that I wasn’t going to leave so maybe he should – as a way of dealing with a potential predator this seems to me to show more backbone than brain, but then, I’ve never looked on pheasants as having outstanding intellects.

Deprived of bugs and birds, I photographed some hopefully emerging crab-apple and quince leaves, but the wind was whipping all the tree branches around in a way that was frankly unhelpful, so I ploughed on in search of less whippy things. Daffodils of course are not less whippy – and in fact the open bloom here was face-down in the soil when I spotted it, its stem fatally creased. I managed to prop it against the tougher bud stem for long enough to photograph it, then removed it to the kitchen and put it in water. I had to clean the dirt off it digitally, but despite all of that and the strong shadows across it, there’s something so cheerful and spring-like about the image that I couldn’t resist posting it.

I’m now off to do cooking, and then singing. I’ll catch you later.