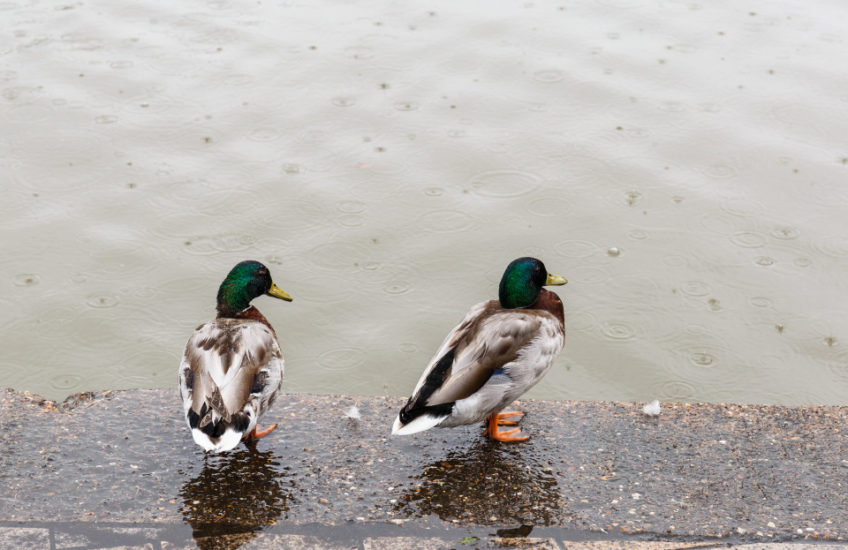 Or maybe not – they didn’t look especially thrilled by the situation. To be fair, it was absolutely heaving down: we’re currently sitting under a weather front which is apparently picking up a substantial chunk of the Atlantic Ocean and dumping in on Middle England. I certainly don’t think I’ll be needing to fret about near-drought conditions in our little patch of Worcestershire any time soon, and in fact I’ve offered up the odd prayer of thanks for the fact that the drains under the road were replaced a couple of years ago, because we’re already at the stage which previously used to result in wellington-deep water down our side of the village.

R and I were in Stratford to have lunch in advance of my surgery tomorrow, and after eating myself to a standstill in Carluccio’s on the excuse that I needed to build myself up (I don’t), I suggested that we should splash across to the Bancroft Gardens so that I could take some photos. We stalked this pair of mallards for a couple of minutes, using a very large black and white umbrella as a travelling hide, and despite the fact that they were clearly onto us we managed to get close enough for me to capture the shot I’m calling Water off a duck’s back.

Just heading off to the kitchen now, for a little snack of toast and whatever I can find in the fridge