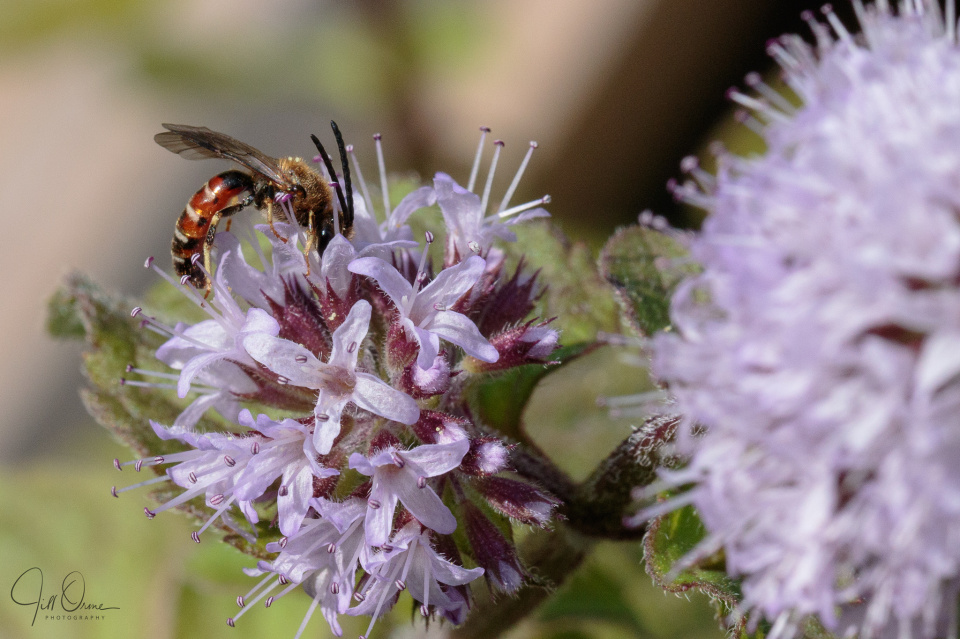 The semi-finals of the Nectar Plunge (Bees, Male, 1cm or less) took place at the Patio Pond this afternoon. The venue was popular with the competitors, as a slight breeze blowing across the water surface provided some relief from the stifling heat.

Here you see L. Calceatum of Team Lasioglossum, showing great style and focus as he plunged the flowers of the Water Mint. Younger competitors would do well to study his posture and carriage: by holding himself in a  bridge curve he was able to move rapidly from flower to flower without wasting time straightening and bending, and the sleek facial line he created by laying back his antennae allowed him to plunge each narrow flower tube efficiently. And yet, as we have seen with all the best athletes in these Alternative Olympic Games, the explosive power he used to propel himself around the Mint was fully concentrated in the necessary muscles, and the rest of his body remained relaxed. How often have we seen inexperienced bees slowing themselves down by tensing up?! L. Calceatum seemed almost to float around the flowers, and yet his score of 47 plunges in 60 seconds was close to his season’s best, and more than good enough to secure him a place in Thursday’s final.

After L. Calceatum’s heat, Team Lasioglossum lodged a formal complaint about the eggs you can see in this photograph, clinging to their athlete’s thorax. It was entirely unacceptable, a spokesbee said, that anyone had been allowed to oviposit around a competition course at all, and at the very least the Stewards should have been alert to the situation, and should have cleaned the Water Mint prior to the semi-finals being run. The eggs, they contended, posed a safety hazard to the rapidly-moving competitors, and having attached themselves to L. Calceatum could well have slowed him down and cost him at least a fraction of a plunge.

The Committee (some of whom had locked themselves in their office by this stage, and were rumoured to be drinking heavily), issued a formal apology for the state of the course, but declined to amend L. Calceatum’s score because all competitors had plunged under the same conditions. Team Lasioglossum is said to be considering taking legal action.