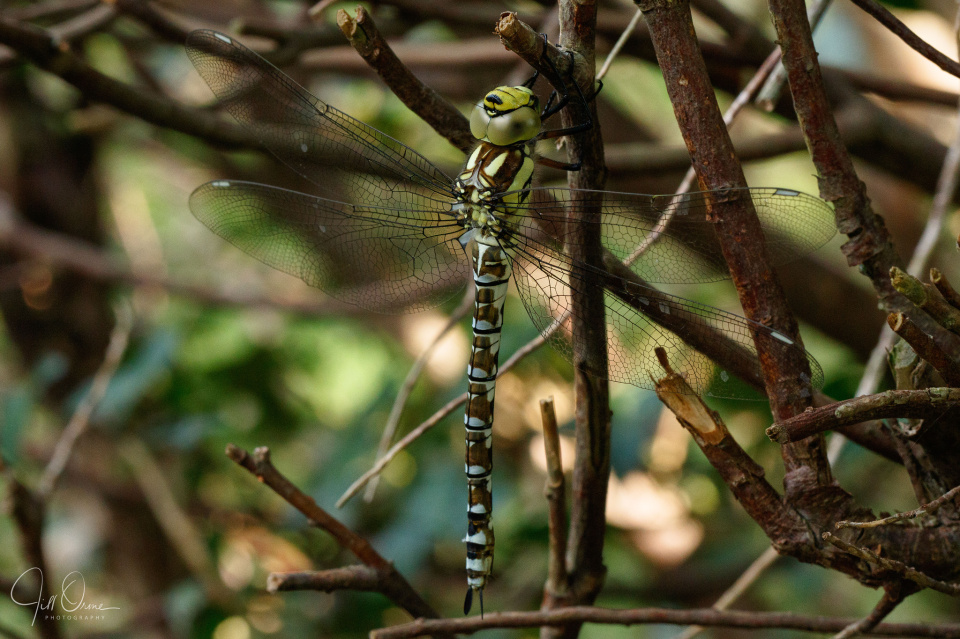 A late entrant and surprise medallist in this year’s Games was this lovely fresh female Southern Hawker, A. Cyanea, who arrived too late to be eligible for either of the two major events for female dragonflies: Oviposition, and Copulation Avoidance. However, after spirited representations to the Committee by Team Aeshnidae, and a surprisingly gracious response by the other teams in the event, she was allowed to enter the Camouflage (Dragonflies, 50mm and over) competition, which – unusually – is open to dragons of both sexes.

The Hawkers have always been especially strong in this event – especially when, as today, it’s held in conditions of dappled light – and it was no surprise that gold was taken by the senior male Brown Hawker, A. Grandis. Unfortunately he couldn’t be found to be presented with his medal, prompting official objections from several other teams, but it was eventually discovered that he’d laid himself along an appropriately coloured branch and simply gone to sleep. Once spotted and roused by a Steward, he accepted his prize and made a gracious gliding circuit of the arena to acknowledge his fans, before rising into the trees and disappearing again.

A. Cyanea put up a highly creditable performance for one so young and inexperienced, winning many admirers and taking the silver medal. Out of the starting gate she circled beneath the trees so slowly that her movement was almost imperceptible, and some spectators became convinced that she had left the arena altogether. She then gently settled on this dead hedge, staying stock still for several minutes, and blending so beautifully into the environment that our photographer wouldn’t have noticed her at all had she not been standing right next to the perch at the time. Bronze went to the senior female Emperor, A. Imperator, who might have pipped A. Cyanea to second place had she not chosen to perch on a leaf in a clashing shade of green.

Team Aeshnidae later made a formal complaint about the behaviour of the photographer, which they claimed had revealed their competitor’s position and thus cost her points – but the Committee have had just about enough of this nonsense now, and dismissed the objection in robust terms. This evening several thunderstorms have rolled across the arena, and it’s to be hoped that the weather, and everyone’s temper, will be cooler tomorrow.