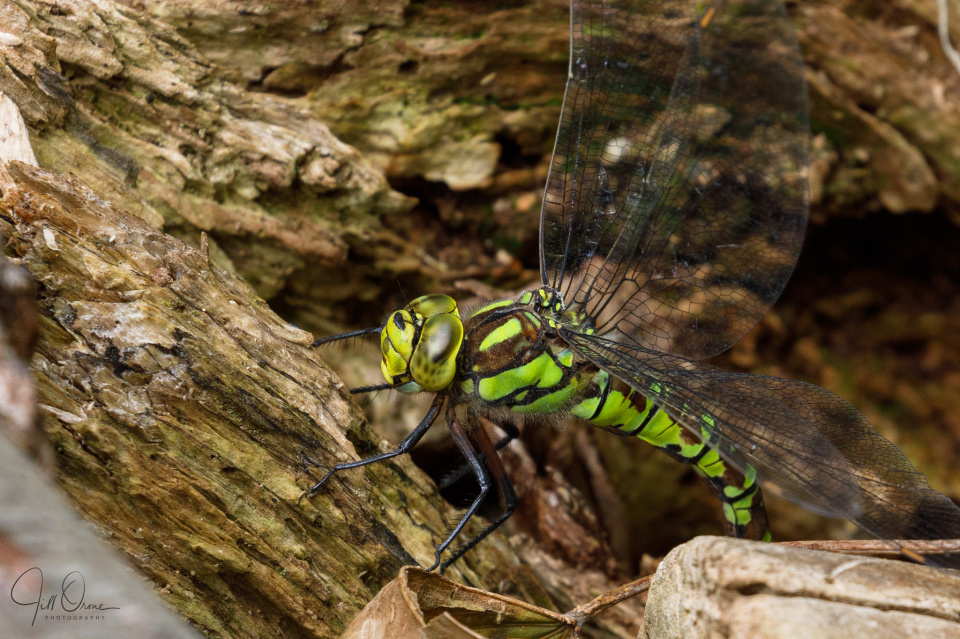 The crowd heard her before they saw her: the unmistakeable rustling sound of the wings of a large dragonfly. Already on the edges of their seats in anticipation of the Dragonfly Oviposition (Hawkers) final, they gasped and rose to their feet when they saw what she was about to attempt. Luna, named for the two spots on her frons, the smaller of which seems to be orbiting the larger, is a dragon noted – yes – for her style, but also, and far more importantly today, for her boldness and élan. Not for nothing is this lovely dragon Number One among the female Southern Hawkers: today she had decided to place her entire egg load in the wood of the log pile, a feat so difficult that it carries a tariff of 9.75, and had only twice before been attempted in competition. Who but she would be so brave?

The crowd settled. The oviposition began – a little tentatively at first – but as she gained confidence the speed of Luna’s egg injection increased, and no surface seemed to present any meaningful barrier to her blade-like ovipositor. Audience and reporters alike held their breath whenever she changed site, for of course this is the moment of greatest danger for an ovipositing Southern Hawker: their runs are not time-limited, but can be cut brutally short if they are seen and seized by a male, and carried away to the trees. But here Luna’s experience paid dividends, as she gracefully skimmed around the log pile, staying low and quiet, and being as unobtrusive as such a spectacular dragon could possibly be.

In a few short minutes it was over. She knew that she had done enough. As the crowd rose in ovation she performed an exquisite double loop in salute, catching a small snack as she turned, and elegantly glided away to the brook to enjoy her treat. A formal complaint was, of course, immediately entered by Team Diptera, who claimed that the snack was one of their team members, but this was dismissed by the Committee on the grounds that insufficient evidence could be produced.

After Luna’s superb round the rest of the finalists must have known that they were now competing for silver and bronze, but it’s not in the nature of Hawkers to give anything less than their best, and the crowd found plenty more to cheer during the afternoon. In particular, the Number Two Southern Hawker, a vibrant young female named Blue, gained many new fans with her spirited and inventive routine. She even made a pass at the log pile, but received a red flag from the judges at this surface when a Log Cam replay revealed that no actual egg injection had occurred. Knowing that she now had much ground to make up, Blue went straight for the tricky Underhanging Overhang manoeuvre, earning crucial points from its 8.25 tariff. The rest of her round involved a succession of stylish moves around the leaves of an Iris Pseudacorus, all of which she executed perfectly; the photo below shows her in action on the Iris, under the watchful eye of the Grass Fly who was judging this particular site. 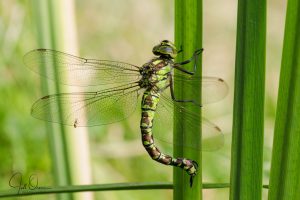 That Luna should take gold seemed almost inevitable, but when her young team-mate Blue was awarded the silver medal, the crowd could barely contain their delight at seeing these two splendid dragons side by side on the podium. Surely no-one would blame Luna if she chose to retire now – for what has she left to prove?! – but we hear that she is already working on a fresh batch of eggs, so we will surely see her in action again over the course of the summer. Blue will have learned much from this competition, and we’re confident she will go from strength to strength over the season; it’s a great pity that she won’t be with us at the Alternative Great North Games next summer, to show those northern dragons what a Southern girl can do!