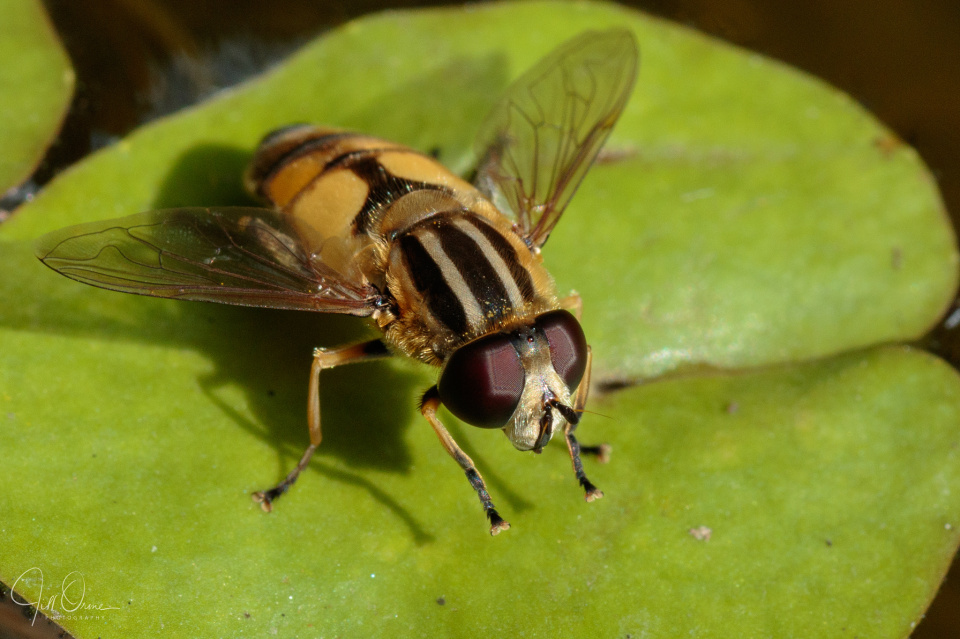 The Hoverfly Copulation Competition concluded this afternoon, with what was surely an inevitable win for H. Hybridus, the hoverfly affectionately known to his team-mates in Team Eristalini as Alpha Male. Here you can see the unparalleled poise and concentration displayed by Alpha during the “lurking” phase of his run. No other fly on the field can maintain this stance for as long as he can – perfectly balanced on just four legs, with his forefeet raised and ready for the “grab”. His tongue enticingly peeping from between his mandibles, and his muscular body perfectly set off by his striking livery, H. Hybridus is surely the male of every female hoverfly’s dreams….

While the Hoverfly Copulation Competition has always been a male event, with females playing a merely supporting role, the identity of Alpha’s partner in today’s winning flight has caused much speculation. Not usually shy of performing in public, he carried her off the field at high speed, and the actual consummation took place deep in a clump of stinking iris, though it was witnessed and validated by the event’s two linesmen, a Semaphore Fly and an Earwig. Reporters were keen to know the identity of this Hoverfly of Mystery, and if the couple were a Couple; asked who she was, Alpha – a fly of few words – replied, “Dunno mate.” Dunno Mate was not present at the awards ceremony to see H. Hybridus receive his gold medal, but a Team Eristalini spokesfly insisted that this was not due to any rift between her and Alpha, but because she was participating in the Synchronised Oviposition (Hoverflies) semi-finals at the time. 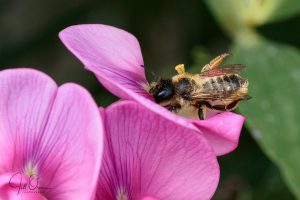 Also going for gold this afternoon was M. Centuncularis of Team Leafcutter, pictured above making her highest scoring strike on the Perennial Pea during the finals of the 200cm Deep Feed (Bees, Female) event. Always the hot favourite to top the podium, today M. Centuncularis gave a masterclass in deep feeding, with her wings and rear legs perfectly relaxed, her middle legs acting as a pivot, and her forelegs working in a beautifully synchronised “scrabble” to drive her head between the petals of the flower. To the delight of the spectators, the judges awarded her unanimous sixes for Technical Merit, which combined with the Perennial Pea’s Degree of Difficulty tariff of 8.75 to give her an unassailable lead over the rest of the field. One judge did ask to see a slow-motion replay of the strike from the Pea Cam, to check that rear leg symmetry was retained throughout, but on viewing the footage professed himself entirely satisfied. On receiving her medal M. Centuncularis thanked the judges for their diligence and professionalism, the crowd for their generous support, and her mother for making her the bee she is today.