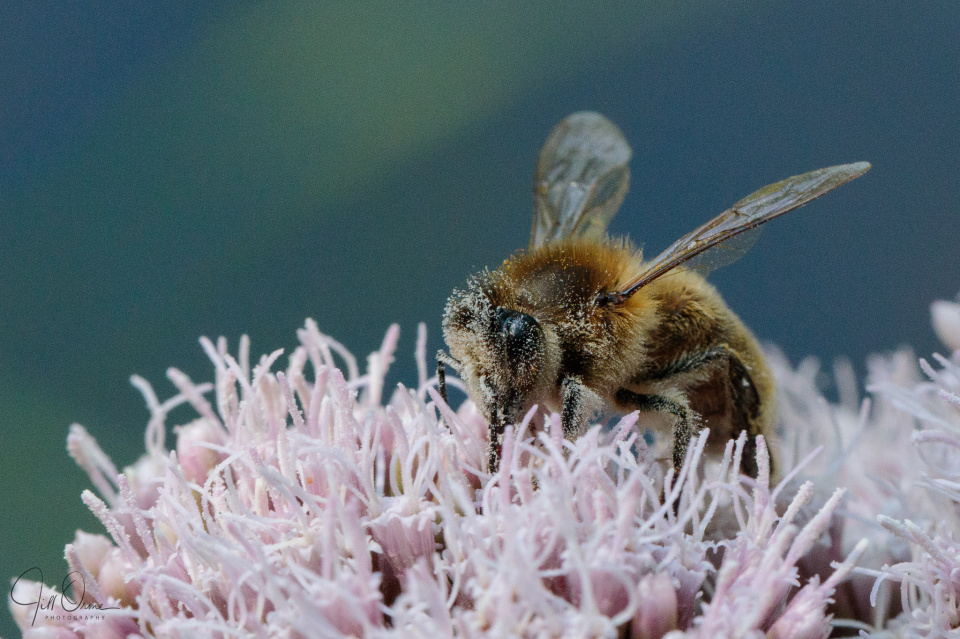 The heats of the 100cm Speed Feed (Bees, Female) took place this morning at a new venue for the Games: a clump of hemp agrimony by the Wildlife Pond, which has come into flower at just the right moment. All competitors pronounced themselves highly satisfied with this venue – a response which surprised the Committee, because in the past this event has been mired in controversy.

I’m sure you will remember the brouhaha which unfolded at the last Games when the cuckoo bees staged a mass walk-out, in protest at the use of pollen brushes by the social and solitary bees. When the latter pointed out that the only reason cuckoo bees don’t have pollen brushes of their own is that they never do any work, stings were produced, and the Stewards had to light citronella candles to protect themselves from the furious competitors. The stand-off was eventually resolved when the rules of the event were changed: any and all methods of collecting nectar and pollen are now considered legal, each competitor is weighed before and after their run across the flower head, and their score is calculated as a percentage gain on their pre-competition weight.

No sooner had this conflict died down when the bumblebees gave a press conference and announced that they would not compete against honey bees, which, they said, were a farmed species and thus ineligible for the Games. You would not, they said, enter a cow in the Grand National. So there. The honey bees, unsurprisingly, were outraged by what they described as a specist attack, and claimed that in fact they were the true upholders of the Alternative Olympic spirit, because they competed as amateurs, in their free time away from their day jobs. The Committee held an emergency afternoon tea meeting to discuss this situation, at the end of which a spokesman, wiping something sticky from his chin, announced that they had decided in favour of the honey bees. Accusations of bribery and corruption were hotly denied, and in the end everyone lost interest and moved on to talking about the next scandal.

Team Honey Bee’s robust defence of their right to compete in the 100cm Speed Feed was amply justified today when A. Mellifera, pictured here, romped away with an emphatic win in her heat, increasing her body weight by 3.867% in just one twenty five second run. As you can see she eschewed the use of her pollen baskets altogether, opting instead for the deep dive technique she used to such good effect in the World Championships last year. Others have since adopted this technique, but no-one has yet come close to A. Mellifera’s mastery of it, and she is definitely looking like the bee to beat in this competition.

STOP PRESS: A late objection by Team Lasioglossum that A. Mellifera had breached the requirement for competitors to be fully identifiable in competition (“That could be anyone!” said their spokesbee. “Can you say you’re 100% certain that it’s her? ‘Cos I wouldn’t recognise my own mother under all that gunk – not that I ever met my mother, but you know what I’m saying, right?”) was rejected by the exhausted Committee.