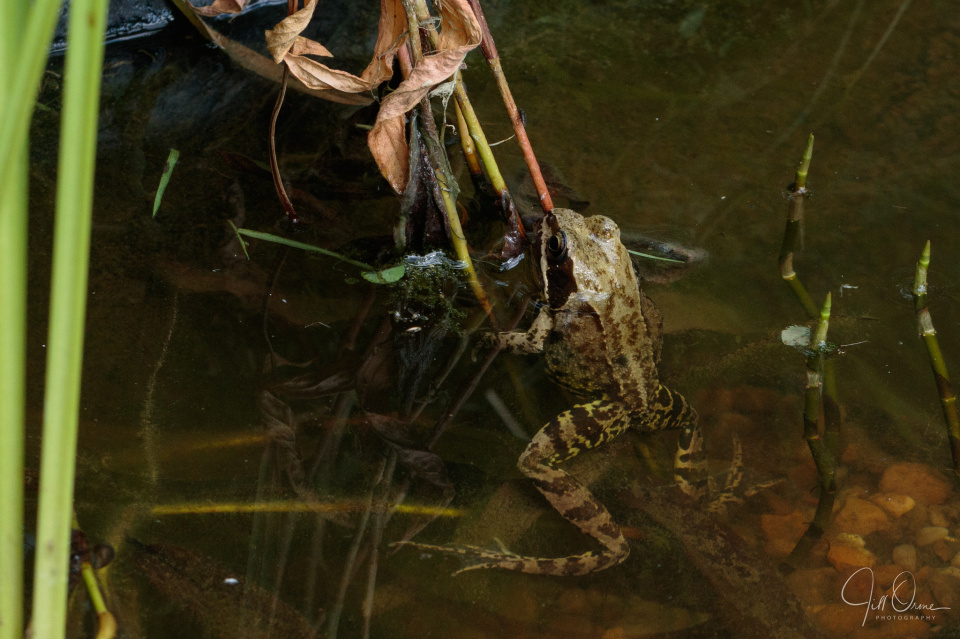 Your dedicated reporter has spent much of this week covering a piscine crisis which threatened to completely destroy a key venue of this year’s Alternative Olympic Games, but is happy to report that following the placement of a container of cleansing barley straw this morning, the Wildlife Pond is now fully functional once again. This must be a considerable relief to the Committee, which has been struggling with discipline issues among the more aggressive teams, and most certainly would not have welcomed the necessity of moving some of the aquatic events as well.

This afternoon the Wildlife Pond was hosting the Helophilus heat of the Hoverfly Copulation Competition, which was proceeding largely in line with the team rankings, when the couplings were suddenly interrupted by a loud splash, and the hoverflies scattered into the trees. An immediate investigation by the Stewards revealed that R. Temporaria of Team Ranidae had anticipated his scheduled appearance in the Frog Jump Competition by a full two hours, leaping from the long grass by the hemp agrimony right into the centre of the pond.

A formal objection was lodged immediately by the hoverflies, who claimed that having been so rudely interrupted they were unlikely to be able to get back in the mood any time soon, and were thus at risk of failing to qualify for the next round of the Copulation Competition through no fault of their own. The Pond Custodian also complained bitterly about equipment misuse – specifically, R. Temporaria’s overly casual handling of the stems of  a water knotweed plant during his post-jump celebrations. Team Ranidae countered by pointing out that R. Temporaria had been extremely alarmed when one of the Stewards had placed a Very Large Ladder so close to his grass clump that he feared being squashed, and decided that if this were to be his last day on earth, he wanted to try for the Frog Jump Record before flattening out.

After heated discussions, the Committee made the following decisions:

1. R. Temporaria’s action was felt to be justified in the circumstances: it was, indeed, a Very Large Ladder, and he is a very small frog. His jump was deemed legal, despite having taken place under the influence of adrenaline, but after the distance between the hemp agrimony and the centre of the pond was measured, it was found that he had missed the Frog Jump Record by several centimetres.

2. The clock was stopped on the Hoverfly Copulation Competition at the moment of the splash, and the Helophilus heat will recommence in the morning.

3. The Steward with the ladder has formally apologised, and will be sent for Frog Awareness training as soon as the AOG 2020 wrap up. He can’t go any  sooner, because he’s the only one strong enough to carry the ladder, and someone has to keep discouraging Team Honey Bee from nesting in the chimney.

4. The Pond Custodian has been told to get over herself.

Your reporter feels privileged to have witnessed these dramatic events on your behalf. It is a particular pleasure to report that R. Temporaria accepted the Committee’s decision with his usual good grace; he really is a credit to his sport, and we must hope that this unsettling incident doesn’t have a lasting impact on his performance. We look forward to seeing him make another attempt on the Frog Jump Record in the next round. Ladders permitting.