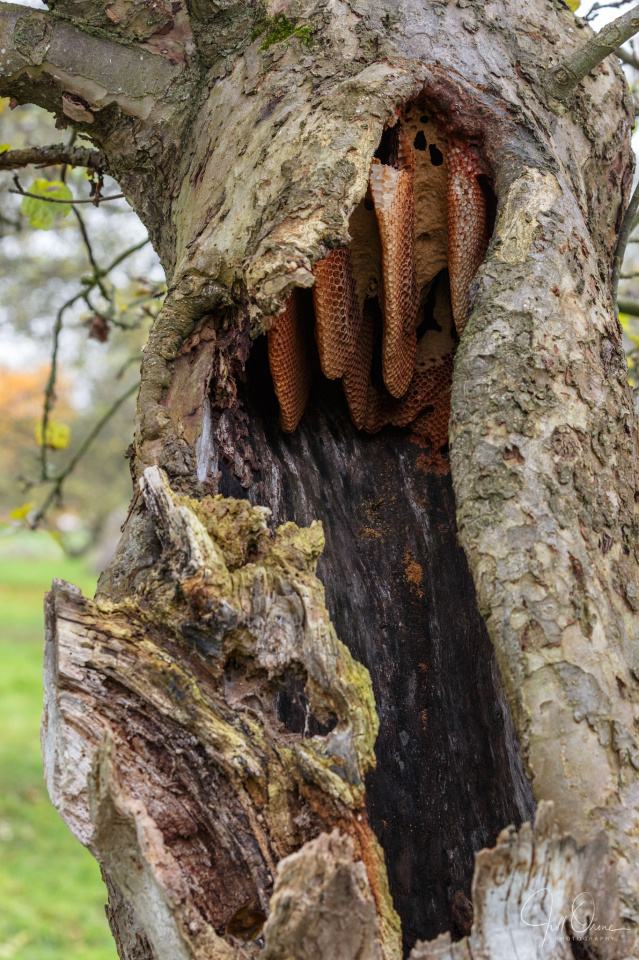 I thought I saw some Scandinavian redwings in the hedge opposite the house this morning, eating sloes – but they were back lit and I couldn’t be sure. I was about to take a photo so that I could enlarge it for a better look, when they suddenly all took off in a flock and disappeared – which is pretty characteristic of the way they behave.

A little later I took a camera and went to see if I could find them, starting with the field next to the little owl orchard, and was lucky enough to find a man in the orchard, pollarding a willow. I spoke to him about a month ago, asking permission to go in there to photograph wildlife, but he’d apologetically said that he would need to check with his two sons, who are the legal owners of the land; now he called me over and said that he’d asked them and they didn’t mind, so I was welcome to go in and take photos whenever I liked.

He then asked if I liked bees, and told me about this tree, which has been colonized by wild bees for the past few years; I was fascinated to see the comb, though glad that I had the long zoom with me because there was quite a lot of wasp activity around it. Interestingly, there’s a woodpecker hole on the other side of the trunk, which the bees were using as their main entrance to the hive, but I couldn’t get a good photo of them because they’re small and dark, and blend perfectly with the dark wood around the hole. I know very little about honey bees, but from what I’ve read it seems likely that these small dark bees are native ones, and are more likely to be able to survive the winter in this rather inadequate shelter than the bigger, paler variety would be.

As I was walking back towards home I spotted some birds in a tree on the far side of a neighbour’s paddock, and even though I couldn’t see what they were, I took a few photos with the zoom at full stretch. With the photos processed and cropped – see the extra – it turned out that they were indeed the migrant redwings I hoped I’d spotted earlier. They’re very shy and quite skittish, but with a little luck I’ll manage a better photo while they’re here on their holidays. 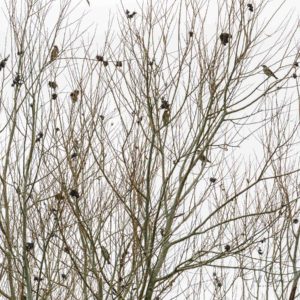