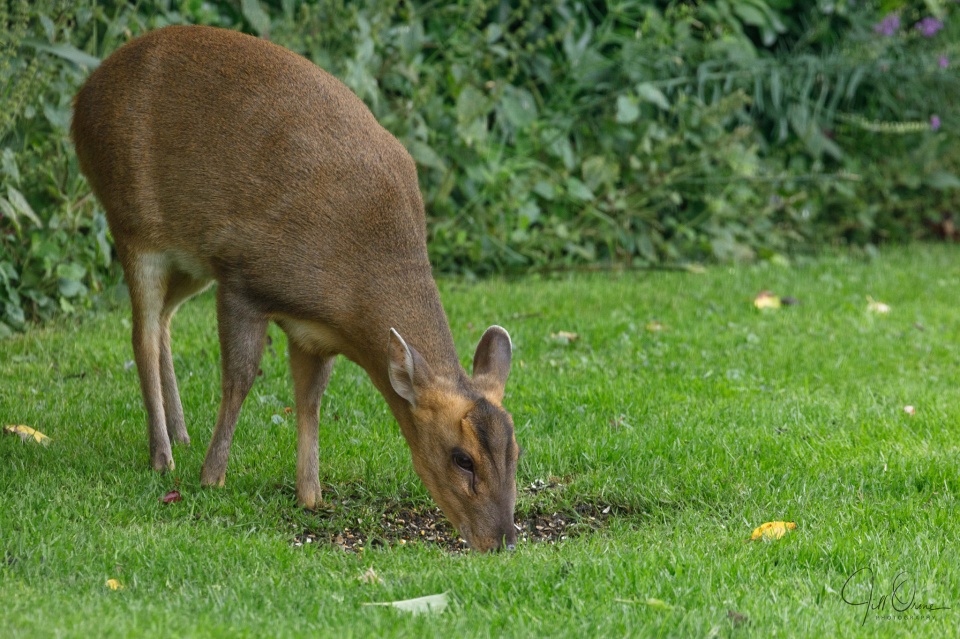 We get muntjac in the garden regularly though infrequently; they also turn up in our neighbours’ gardens, and I’ve seen them in an old orchard in the very centre of the village, so I’m pretty sure that they’re resident here. When the dogs were still with us the presence of a muntjac in the garden would drive them crazy – especially Arthur, who was a hound, and by nature would hunt anything that would run from him – so R and I had a few hectic sessions, chasing around after the dogs and trying to grab them before they could corner and attack the deer.

Luckily, though they look dumpy and unathletic, muntjac are pretty fast and can jump surprisingly high, especially when they’ve got a large compost heap to run up as a kind of launch pad. I always feared that the dogs would learn to copy this trick, but I think that jumping down from anything higher than the snug sofa was probably just too daunting, and they never risked it. The other muntjac secret weapon is that in extremis they scream – and I mean really scream, as if they’re being slowly and painfully murdered. We had a juvenile in the garden one day, a situation which initially played out as normal: dogs barked, muntjac ran, dogs gave chase, R and J grabbed brooms and chased dogs and muntjac…. but as we caught the dogs and began to pull them away, the deer managed to push itself between two layers of chicken wire fencing, got stuck, and began to scream. All of the chasers were stopped in our tracks by this noise: the dogs were only too happy to get away from it, and let me drag them into the house with only the most token show of resistance, and I shut the back door with considerable relief, leaving poor R to deal with the banshee on his own. I’m not sure his hearing has ever fully recovered.

Now that we’re (sadly) dog-free, the muntjac and all the other wildlife that Arthur so loved to persecute have free run of the garden, and this morning R called upstairs to let me know that the doe was tidying up under one of the bird feeders. I’m wondering if I might be able to train her to do housework as well.