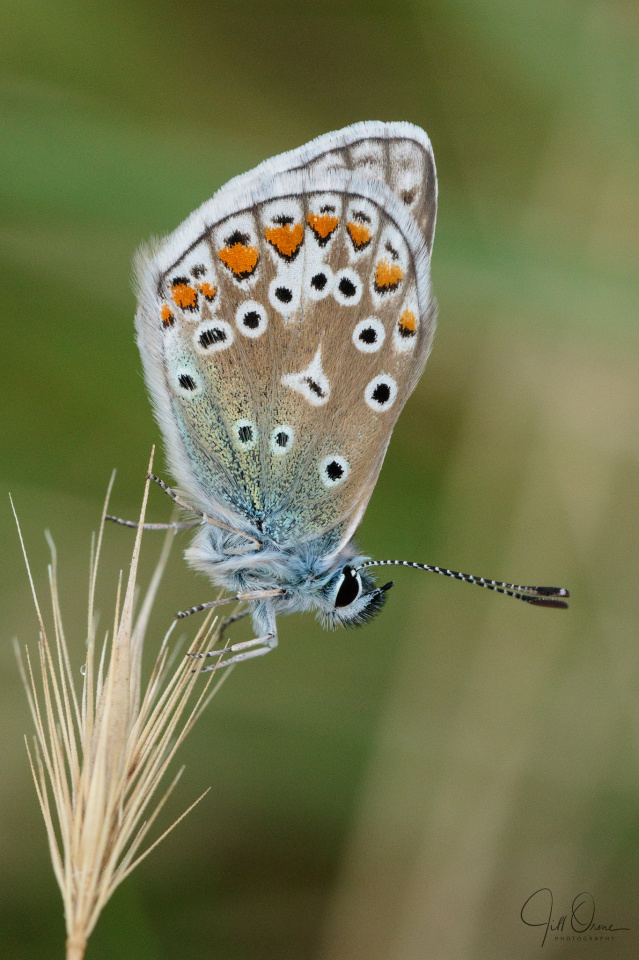 I was rummaging around in the long grass in Tilly’s field, looking for a grasshopper to photograph, when I inadvertently disturbed this Common Blue. He flew into the middle of the field and settled on this grass stalk, where he clung on for the next twenty minutes, according to the time stamps on my photos files, despite a strong gusty wind whipping the grass around almost constantly.

I felt quite guilty about having dislodged him from his roost, but as he was now out and about there didn’t seem much point in not trying to get a photo, so I worked my way slowly around to the side of him that was most frequently uppermost, and set to work. If I tell you that I took over a hundred photos and have kept three (and none of those completely sharp from top to bottom and front to back) you’ll get an idea of how frustrating a process this was. In the end I gave up trying to get to his level by bending or squatting, and just knelt down on the sodden grass – to the detriment of my knees, which I think may now be going rusty.

Still, all things considered, I’m moderately happy with this. The shutter speed could have done with being faster and the aperture narrower, but in the Stygian gloom they were a necessary compromise with my desire not to push the 7D’s ISO to the point at which it produces ugly grain. I was helped a little by the the fact that I was using the Lumimuse.