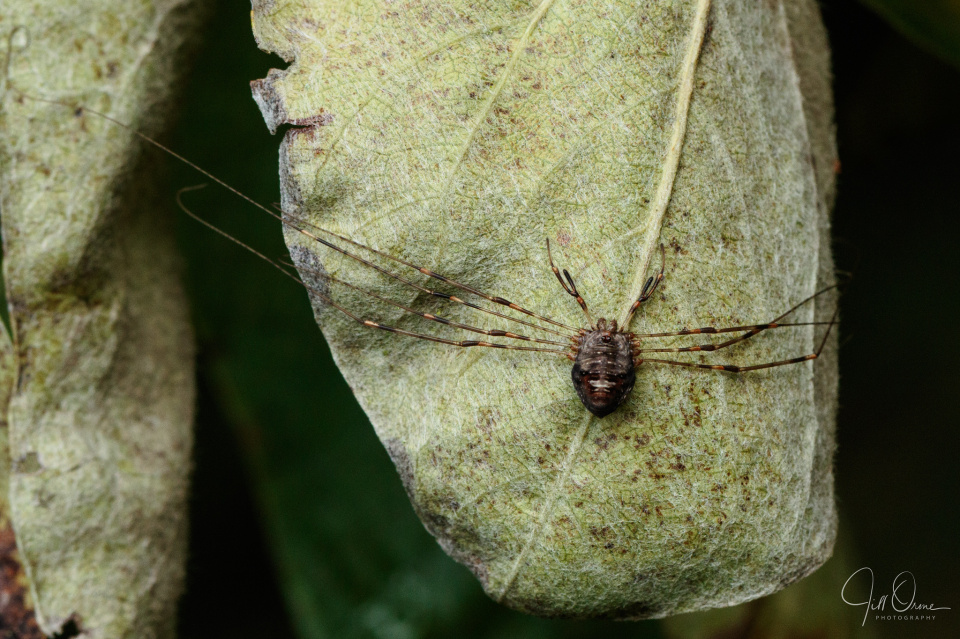 It was a strange kind of day, weather-wise: periods of bright and even warm sunshine, interspersed with bouts of heavy rain. By dodging the showers, and resorting to flash when necessary, I managed to capture some reasonably pleasing bug portraits, and I’ve put a selection of them on my Facebook page, if you’d care to see them. I was very pleased to find a cream-spot ladybird skulking in a curled quince leaf, because I’ve only recorded this species twice before, but the star of my day – and a first record for me – was this extraordinary harvestman. There’s a closer view of her among my Facebook photos, but R said that I really should post an image here that would show you the incredible length of her legs.

Opiliones are an ancient order of arachnids, but contrary to popular assumption they’re not spiders. They have no silk glands, so can’t spin webs; and they don’t produce venom, so they’re entirely harmless to humans. Unlike spiders, many of them are omnivores. They haven’t been studied as much as other invertebrates, and therefore tend to be quite poorly understood, but interest in them (including mine) is now growing. The Field Studies Council has produced an excellent web site to help people identify the harvestmen they find, which then allows them to be recorded, to help scientists map their distribution.

The combination of ridiculously long legs and forked pedipalps makes this one of the easier harvestmen to identify, at least to genus level. She’s a Dicranopalpus, and probably Dicranopalpus ramosus – though in 2015 taxonomists proposed splitting this species away from the very similar Dicranopalpus caudatus, which had previously been thought to be a variant of the same beast, so now I’ll have to record her as Dicranopalpus ramosus agg., or simply Dicranopalpus sp. Dicranopalpus ramosus was a North African species until just a few decades ago. It spread into Europe from Morocco just after World War II, and was first recorded in the UK in 1957, moving rapidly northwards from the south coast, and reaching Scotland by 2000.

Lacking weapons, Opiliones have developed a variety of defensive strategies when they’re attacked, including secreting various noxious chemicals to make themselves unpalatable to predators. The long-legged species like this one tend to drop to the ground and run in the face of danger, so I’m pleased that my camera and I didn’t scare this female from her perch. A rather more drastic measure is called autotomy, which means self-amputation of a leg, and is probably the explanation for her having only three legs on the right side. The autotomised limb will continue to move for some time after being shed, which can distract and confuse the predator, and give the harvestman time to escape. It doesn’t regrow though, which obviously has a cost in terms of the individual’s future speed and strength, so it’s not a strategy to be undertaken lightly – or often.