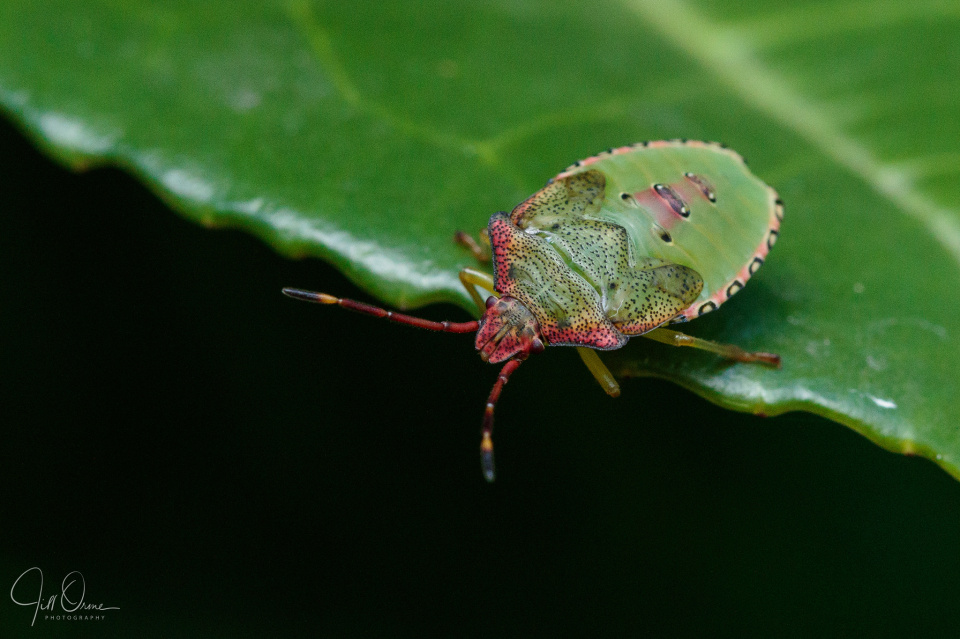 This is a final instar Hawthorn Shieldbug nymph – a rather unexpected find in the garden today, given the date. I was a little worried when I spotted him, because he doesn’t have much time to complete his transformation to adulthood before the winter sets in, and he should be planning to overwinter as an adult, emerging to breed next spring. I’ve looked him up on the excellent British Bugs site though, where it says that nymphs of this species can occur through into the autumn, so with luck he’ll manage to survive and thrive.

According to British Bugs, Hawthorn Shieldbug nymphs mainly eat hawthorn berries, but will also feed on a range of other deciduous trees, including oak, hazel and birch. We have all of these in the garden, but this little chap was nowhere near them: he was in a laurel hedge, which has a large pyracantha growing through it. Both have berries, but I haven’t been able to find out whether he can live on them – I think it’s likely though, because at this stage he can’t fly, so he’s more or less stuck in the place his mother laid him, and he’s clearly been eating something to get to this stage of development.

British Bugs also says that as adults Hawthorn Shieldbugs can be confused with Birch Shieldbugs – which is a nice coincidence, because I also found one of those today, the first I’ve recorded since the spring of 2017. I’ve put its photo, and a couple of others from my garden bug hunt, on my Facebook page, if you’d care to take a look.

In other, worse, news, my flash unit blew up in between the photo of the cucumber spider and the shot of the Birch Shieldbug. This made me quite unhappy, but I’ve ordered an inexpensive ring flash to replace it, and if that works out well I may come to think that losing this one was a blessing in disguise. We shall see.