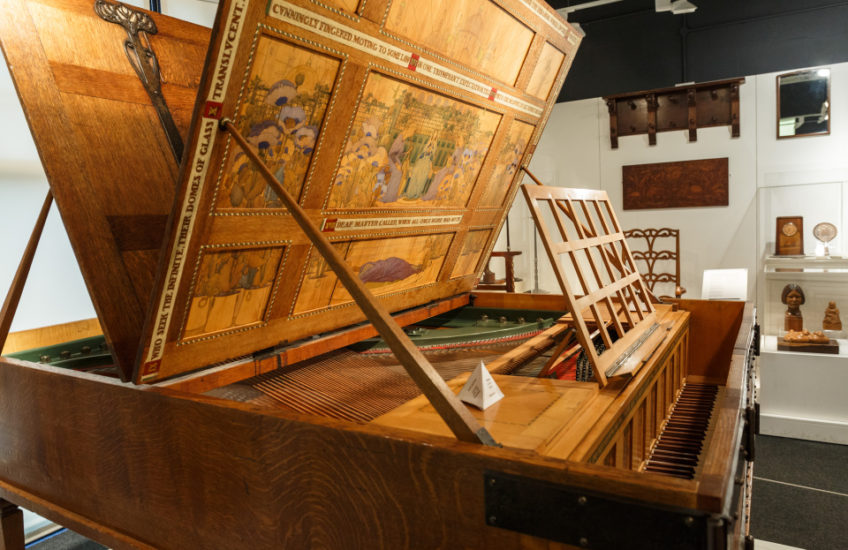 If you’ve followed my ramblings for any length of time, you’re probably aware that R and I are very into the tradition of art and design that began with the Arts & Crafts movement in Great Britain in the second half of the C19th, and stretched through to Art Nouveau and Secessionism. Today we went to Cheltenham and spent a happy hour or so in the Arts & Crafts Gallery of The Wilson, which contains some lovely pieces and emphasises the link between the Arts & Crafts movement and the Cotswolds. A few years ago I read several books on all of this, and though I’ve now forgotten much of what I used to know (damn you, advancing years!) I still remember enough to be able to recognise an Ashbee pendant or a Gimson chair, and I found this small but nicely presented collection fascinating.

R’s favourite piece in the gallery is this piano, which consists of a Broadwood mechanism re-cased to a design by C. R. Ashbee, and created as a wedding present for his wife Janet, who was apparently a very good pianist. Ashbee was the man who brought the Guild of Handicraft from the East End of London to Chipping Campden – only to discover, to his surprise and dismay, that many of his workers preferred the slums of Whitechapel, where there was at least plenty going on, to the rural slums of the Cotswolds, which were suffering from an economic slump due to the collapse of their traditional wool trade, exacerbated by the isolation of the scattered communities. Within a few years many of those who came had left again, but others did stay, and though the Guild itself was wound up in 1907 there is a heritage Guild of Handicraft and an ongoing craft tradition in Chipping Campden today. The Ashbees had an unconventional marriage – he was homosexual, and it’s said that the marriage remained unconsummated for a number of years, during which Janet is known to have had at least one affair – but the relationship did endure, and ultimately produced four daughters.

After our fix of Arts & Crafts we went for lunch at l’Artisan, and then yomped (or limped in the case of R, who has injured his ankle again) most of the way down the long High Street to the Cheltenham Model Shop – which is a positive Aladdin’s cave of delights for the photographer of tiny figures. I managed to restrain myself, and only bought another two sets of Bachmen – and Bachwomen – but I suspect that I’ll be going back there on a fairly regular basis now that I’ve tracked it down.

There are a few more photos of the Arts & Crafts Gallery here.