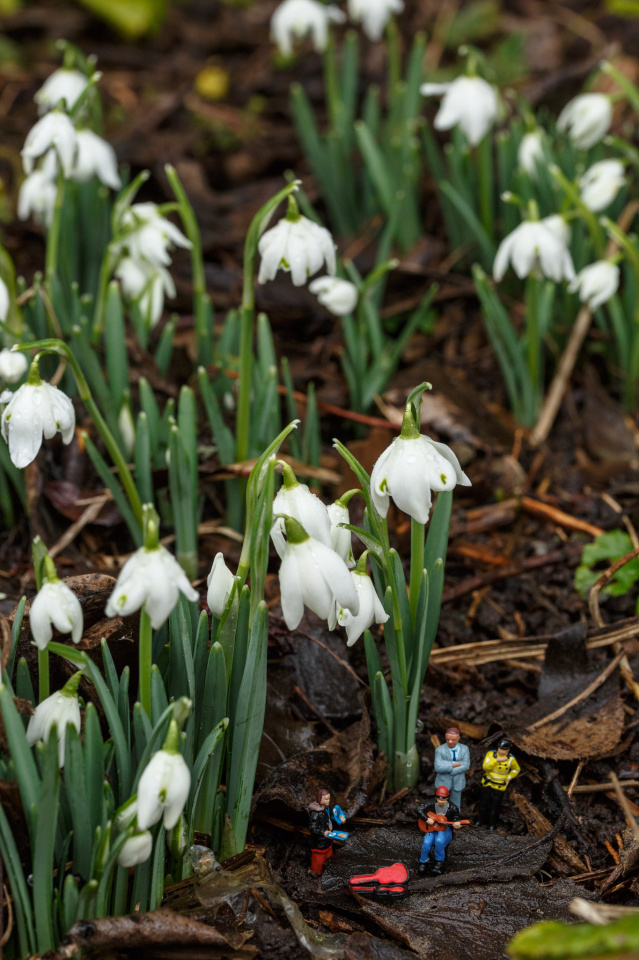 Attracted by the sound of singing, the Policewoman made her way to where the Busker was seated on a small stool, his guitar case open at his feet with a handful of coins scattered across the plush lining. There was something incongruous about the fact that he was singing Bruce Springsteen’s No Surrender while sheltering from the rain beneath a snowdrop, but his voice was good and she found herself caught up in the song as she watched the scene.

The busker’s girlfriend was not, thought the Policewoman, enjoying her role as Hander Out of Flyers – she looked angry and tense, and passers-by were tending to give her a wide berth. Someone who had taken a flyer promptly dropped it again – despite the Policewoman’s raised eyebrow – and it fluttered to the ground at her feet. The headline read MUSICIANS NEEDED FOR NEW BAND; the rest of the text was too small for her to read without picking up the piece of paper, but she could see a phone number at the bottom.

Just then a Businessman arrived and stopped beside her, watching the Busker intently. When he began to speak she sighed internally, thinking Here we go – is it the noise, or the littering he’s going to complain about?; but to her surprise he said, “I’ve always wanted to be in a band.” “Me too, actually,” she replied. “I sing a bit in my free time…. but I’m probably not good enough for a band.” They fell silent, listening. As the song finished he said, “If I had a band, do you know what I’d call it?” Obviously not, she thought. “Ummm… not sure…. The Capitalists, maybe?” He turned and gave her a very Special Look. “I’d call it The Potatoes of Defiance.” She stared at him, astonished and unable to think of a reply. “It’s a quote,” he explained. “My favourite Terry Pratchett quote: Fear is a strange soil. It grows obedience like corn, which grow in straight lines to make weeding easier. But sometimes it grows the potatoes of defiance, which flourish underground.”

As she gazed at him, standing in the rain in his well-cut suit, talking about fear and defiance, she felt her face breaking into a smile. “That’s a great name,” she said. “I’d definitely go out of an evening to see a band called The Potatoes of Defiance.” Suddenly, he seemed to become embarrassed, and clearing his throat nervously he walked away, dropping a £5 note into the Busker’s case as he passed. The Policewoman watched him go, thinking Well…. you turned out to be a great deal more interesting than I thought you’d be. The question is: good interesting…. or bad interesting? I think, Sir, that I might have to keep a bit of an eye on you….

As the Policewoman resumed her beat she heard the Busker begin singing Leaders of the Free World, and had to resist the temptation to improvise a couple of little dance steps. Elbow: that’s very cool, she thought. Good taste. Nice voice. Needs a new woman. I might just have to keep a bit of eye on you too, my friend…..