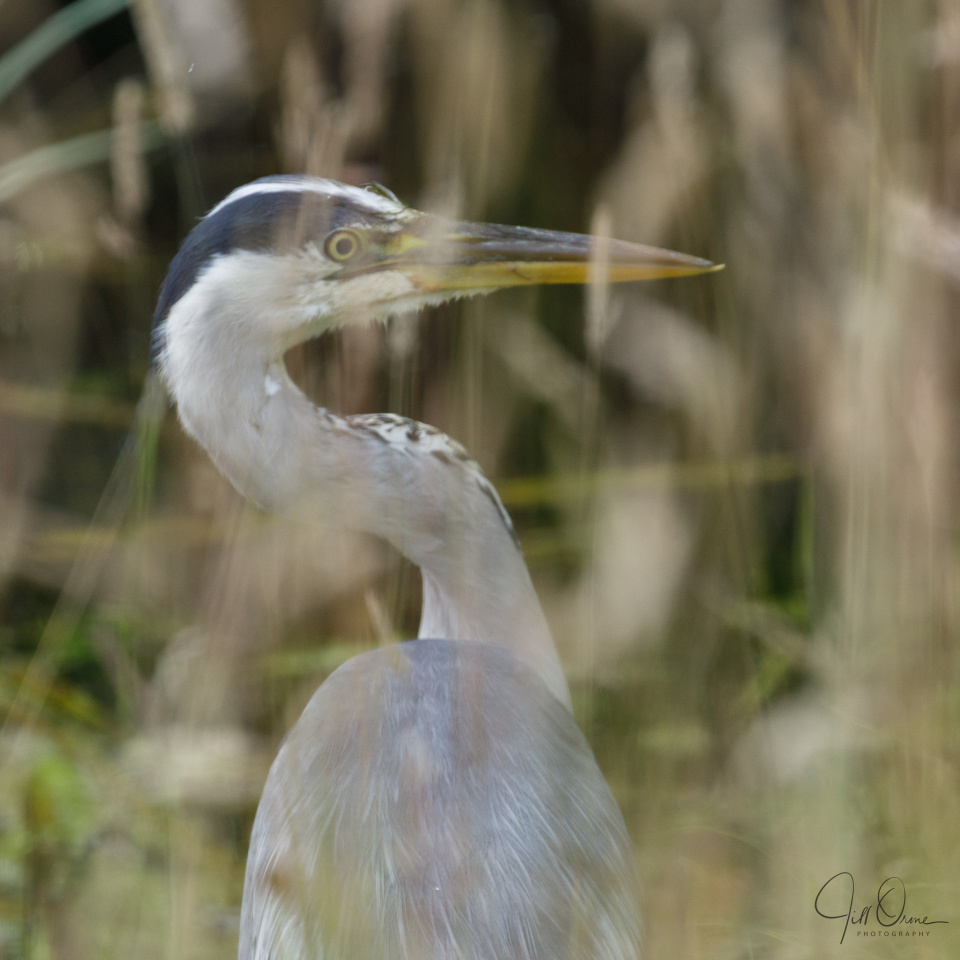 It was a dark and murky morning, but after lunch the light started to lift, and in the middle of the afternoon we made a snap decision to go over to Croome for a walk. And in my case, to see what was going on, Odonata-wise. (Obviously.) The lake was being ruled by Black-tailed Skimmers, but there were also a couple of Brown Hawkers and an Emperor out hunting, plus a handful of Ruddy Darters hanging around the island reed bed. And I was pleased to bag my first Small Red-eyed Damselfly of the year, which brings my count to twenty four species for the season so far.

I’d paused to photograph the Ruddy Darters on the island while R wandered on ahead of me, and when I turned to follow him I was surprised to see him standing by the second bridge, staring into the reed bed. A couple of people on the bridge were also gazing in the same direction, and as it seemed unlikely that they were looking at nothing I approached slowly and quietly, and discovered that one of the herons was fishing just a couple of metres in front of them. This is extremely unusual behaviour: although the herons on the estate get to see a large number of visitors, they won’t normally allow you anywhere near them, and I’ve never ever seen one in that area, which is both busy and quite enclosed. Shooting through fairly dense reeds required manual focus, and I only got this one shot before the heron moved away from the bridge into even thicker vegetation, so I was lucky to capture the event at all. So, yes – it is a slightly odd image; but it’s a record of a dramatic encounter that probably won’t be repeated. 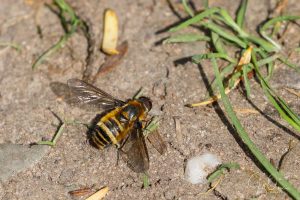 A second unusual encounter occurred as we were on our way up the hill towards the Rotunda, when I spotted an insect on the ground in front of us that I couldn’t immediately identify. Its attitude put me in mind of a bee fly, but it didn’t look like either of the Bombylius species I know well, so my next thought was that it might be a hoverfly. When I got it on camera, though, I realised it was something I’d never seen before, and that was going to require some research. I now know that my first instinct was correct: it’s a bee fly called Villa cingulata, or in English the Downland Villa, and the reason I’d never seen one before is that they’re pretty uncommon. I’m ridiculously pleased with myself for having spotted it, so even though it had paused on a sadly unphotogenic bit of path I can’t resist posting the photo.