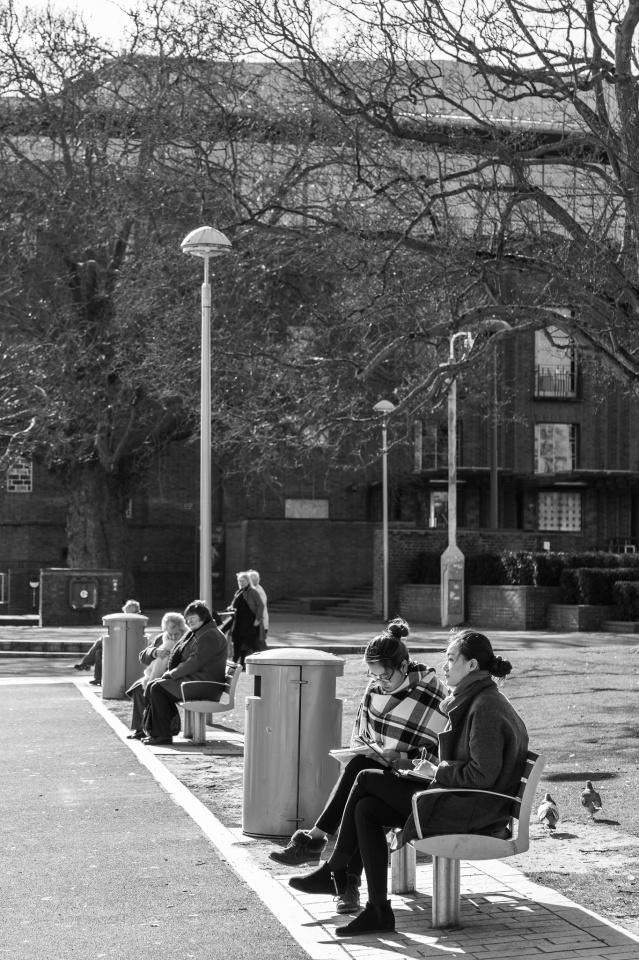 As trisharooni is setting Mono Monday this month and she’s a master of street photography, I chose to interpret her theme today as a request for street shots. I had to go to Stratford this afternoon, and as there’s usually something going on there I thought the quest would be an easy one – but though it was a bright early spring day it was cold, with a cutting wind blowing in from the north-east, and instead of hanging around being interesting, the few people who’d braved the streets were scurrying from one bit of shelter to another.

After checking out the usual tourist haunts and finding almost no-one there, I walked down to the river and struck lucky in the Bancroft Gardens. The older women on the far bench knew what I was about and had been keeping a discouraging eye on me for a while by this point, but if the two pretty young students knew they were being photographed they gave no sign of it. They must have been raised hardy to be comfortable sitting on that bench to work – I was wrapped in two jumpers, a ski jacket and heavy walking boots, and still shivered violently every time I stood still for more than a few seconds.  In my youth my elders used to say, “Were you born in a barn?”  to anyone behaving in a way judged inappropriate to the cold, but in these more enlightened times I wouldn’t risk saying something so potentially offensive to anyone other than a close relative or friend.

I’ve also put in an extra today: one of a series of quick shots I took as I turned to leave the Gardens. I’d been photographing a couple of women who were standing on the Canal Bridge throwing bread to the gulls, and then glanced down and saw a young woman sitting almost under the bridge, photographing the swans. She also had some bread which she’d used to attract this little crowd, but unusually the swans were behaving quite politely and not trying to mug her. Watching her lean down over the water made me feel quite vertiginous. 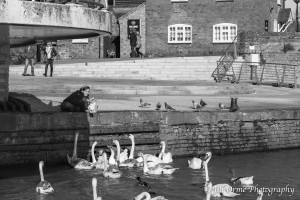