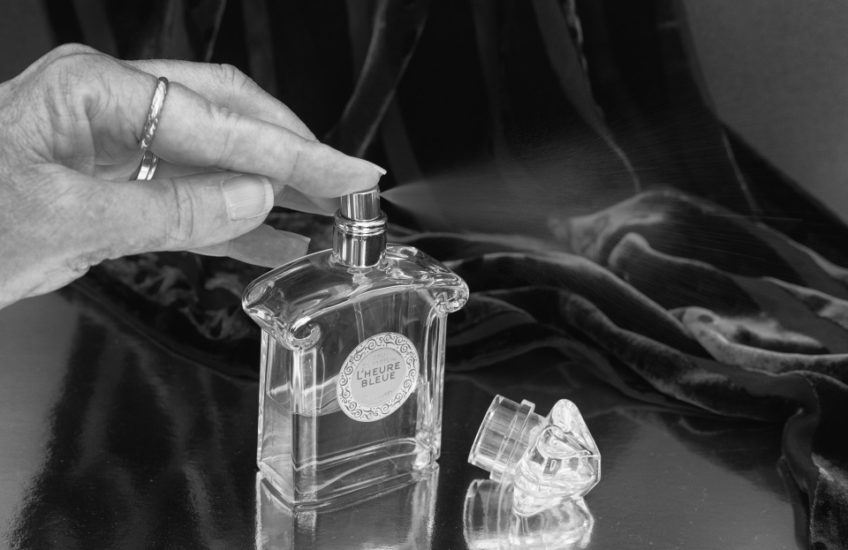 For the second day in a row I’m indebted to R for the idea for my photo of the day; when I mentioned that I was thinking of doing a still life of perfume bottles today, he suggested that it would be cool if I could photograph the spray from one of them. Which I think it is – and it only took me 121 shots to achieve three that I like.

I chose to use a bottle of L’Heure Bleue partly because the idea of wasting any of my special favourite Mitsouko makes me hyperventilate, but mainly because its name is so appropriate for what we do – though I have no evidence that Jacques Guerlain, who created it in 1912, was himself a photographer. The Guerlain web site (somewhat pretentiously) says this:

‘”The sun has set, but night has not yet fallen. It’s the suspended hour… The hour when one finally finds oneself in renewed harmony with the world and the light,” Jacques Guerlain liked to say. He was referring to his favourite moment, when “the night has not yet found its star”. It was this fleeting sensation that he tried to express in 1912 with L’Heure Bleue.’

Guerlain choose not to mention this, but the term is also used to describe the hours between leaving work and arriving home for dinner, when a well-to-do French gentleman might visit his mistress; of course, this is appalling behaviour, and one can’t condone it  – but it is described quite amusingly here by Michael Bywater in The Independent. So in setting up my photos I draped some expensive scarves across the frame – as if across a dressing table mirror, or a bedroom screen. And fittingly, after 121 shots, the conservatory smells like a t….. no, never mind.

R’s comment on arriving home from work was even ruder than the one I was about to make: he said the house smelled like a hairdresser’s. A hairdresser’s!  This is Guerlain, R, not Elnett. Anyway, I think the ambience is now returning to normal, so either having every window in the place open for the past three hours has worked, or my nose has reached the point of complete exhaustion. And at least I won’t have to worry about clothes moths producing their voracious offspring in my scarf drawer for a while, which as we seem to be hosting the national breeding programme for the little beasts, is definitely a Good Thing.