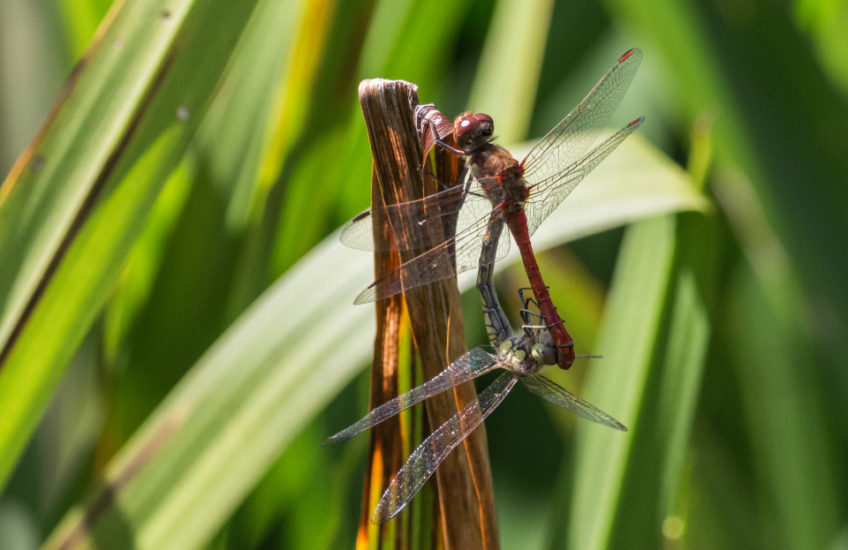 I spent the morning at NT Croome, hunting Odonata and giving a good work-out to the Big Lens – which has been under slight suspicion since the 5D broke, but which I’m happy to say is fine. I used it to take this shot, because when I spotted these Common Darters they were quite a distance away from me in a reed bed; though I did eventually manage to get close enough to them to take a couple of photos with the macro, they had to be quite heavily cropped, and this one is much clearer.

Dragonfly people refer to this formation as being “in cop”; while it’s not uncommon to see dragonflies and damselflies flying in tandem, with the male in front, clasping the female’s head, it’s only when the female bends her abdomen forward to be grasped by the male’s secondary genitalia that copulation happens. This process can take quite a while – I watched this pair for several minutes – because the female is promiscuous, and as the last sexual partner before egg-laying will fertilise her eggs, the male’s penis is adapted to scrape out the sperm of earlier partners before he deposits his own.

Once copulation has occurred, he will try to maintain his grip on her head while she oviposits, to guard her and make sure that no rival males can replace his sperm with their own. At one point this morning I counted thirteen pairs of Common Darters in one small section of the lake –  all flying in tandem, with the females ovipositing, while a few lone males harrassed them and watched for their chance to copulate in their turn. 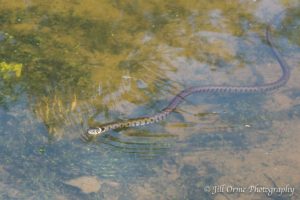 My second extra is one of those rare shots (for me anyway) when you see a tableau forming, lift the camera, press the shutter button – and the image is exactly what you wanted it to be. I’m calling it “No, I’m making an omelette”. 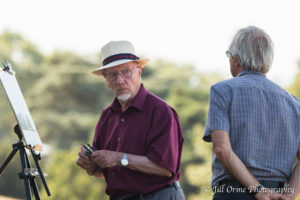